On the morning of Tuesday, November 23, 2021, a group of African scholars and Shiites met with the Deputy for Scientific and Cultural Affairs of the AhlulBayt (a.s.) World Assembly. 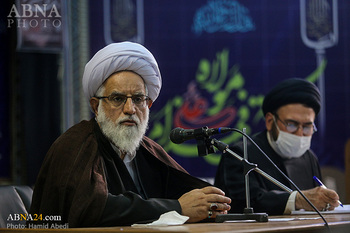 On the morning of Tuesday, November 23, 2021, a group of African scholars and Shiites met with the Deputy for Scientific and Cultural Affairs of the AhlulBayt (a.s.) World Assembly in Qom.

“The late Imam Khomeini (r.a.) breathed new life into the free and human beings and emphasized that we are all servants of God, and we must fulfill our mission and duties,” he added.

“The global arrogance seeks material and worldly comfort and tranquility and tries to turn away from God and forget the divine realm of man,” said the Deputy for Scientific and Cultural Affairs of the AhlulBayt (a.s.) World Assembly, on the goals of global arrogance.

“God did not create man for the material world. Rather, Man was born to fulfill a divine mission. The world is the place of our mission, and our mission is defined by God for man,” he said, referring to Islam’s view of man.

“Global arrogance does not want to pay attention to the divine dimensions of man. They show man as a purely material being in order for the world to be provided for them,” Hojat al-Islam Ahmadi Tabar added.

“In order to understand our mission and duty, we must refer to the Quran and the hadiths of the Prophet Muhammad (p.b.u.h) and the Imams (a.s.),” he said.

“Africans are severely oppressed, and their capital is being looted. Therefore, it is necessary for the nations of the continent to be vigilant and to achieve wealth through cooperation,” said Deputy for Scientific and Cultural Affairs of the AhlulBayt (a.s.) World Assembly about the oppression against the people of the African continent, stating that the Imams (a.s.) have always advised and emphasized cooperation.

“Many problems will be solved with cooperation and exchange of views,” he added.

“One of the things that can be done to improve the situation of the Shiites is to establish schools. It is necessary for the Shiites to reach higher levels of science. Because today science and knowledge play the leading role in the world. The Shiites of Africa must also be strengthened financially and economically,” stated Hojat al-Islam Ahmadi Tabar in the end.