“Hazrat Abu Talib (a.s.) has a special position in Arabic literature and one of the gaps in this field is the lack of study of his poetry in the eyes of writers,” said the researcher of religious sciences. 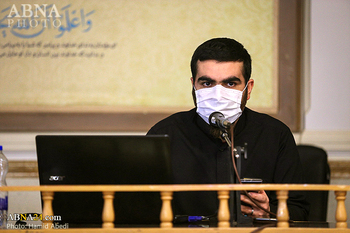 The 3rd meeting of the International Conference of Hazrat Abu Talib (a.s.), the Supporter of the Grea Prophet (p.b.u.h), entitled the Committee of Poetry and Literature was held on Tuesday evening, March 9, 2021, in Shahid Sadr Hall in Imam Khomeini Higher Education Complex.

The chairman of the committee was Ayatollah Mohammad Saeed Nomani, the judge was Dr. Baqer Ghorbani Zarrin, a member of the faculty of Islamic Azad University Central Tehran Branch, and its secretary was Hojat al-Islam Valiullah Madanipour.

“In this article, we have collected citations from Lamia ode in important Arabic books. This should be done for all the poems of Abu Talib (a.s.),” said Ahmad Bararian at the beginning of the committee, referring to his article entitled “Citations to the Lamia Ode of Abu Talib in Arabic Literature”.

“Although our work on collecting citations was limited to the Lamia ode, we followed the four branches of grammar, syntax, rhetoric, and vocabulary, and the article “Citations to the Lamia Ode of Abu Talib in Arabic Literature” was the result of my joint work with Mr. Sayed Muhammad Ali. Hashemi. The writing of this article took 150 hours, part of which was spent on preliminary studies. To write the article, we studied the Divan of Abu Talib (a.s.) and other works appropriate to the subject of the article,” he continued.

“For the article “Citations to the Lamia Ode of Abu Talib in Arabic Literature”, we looked at more than 50 sources, including the book “Al-Ayn”, the book “Asas Al-Balagha”, and the book “Sharh Al-Nezam”. The resources of this article were not limited in time and we brought out the leading books from prominent authors in the article. The article was organized in 6680 words in 9 sections,” added the researcher of the religious sciences.

Abu Talib’s poetry in Arabic literature, examples of syntax, examples of morphology, examples of vocabulary, and examples of rhetoric, are among the various sections of the article “Citations to the Lamia Ode of Abu Talib in Arabic Literature”,” added the researcher of religious sciences.

“The position of Abu Talib (a.s.) poetry is neglected among the writers. The question must be answered whether the literary aspects of the poetry of Hazrat Abu Talib (a.s.) are accepted by prominent writers or not,” he mentioned.