Ayatollah Reza Ramazani, issued a message of condolences on demise of Dr. Jalal al-Din Rahmat, the chairman of AhlulBayt (a.s.) Society of Indonesia and former representative in country’s Parliament. 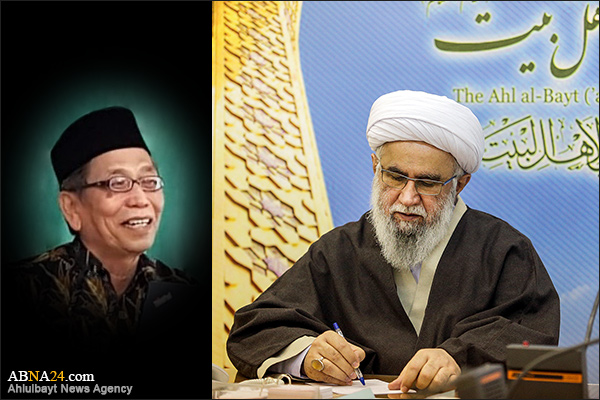 Ayatollah Reza Ramazani, issued a message of condolences on demise of Dr. Jalal al-Din Rahmat, the chairman of AhlulBayt (a.s.) Society of Indonesia (IJABI), former representative in country’s Parliament, and the prominent member of the AhlulBayt (a.s.) World Assembly. The demise of the great thinker and skillful preacher of the Islamic teachings, Professor “Jalal al-Din Rahmat”, the chairman of the AhlulBayt (a.s.) Society of Indonesia (IJABI), caused great grief and sorrow.

Through the establishment of various institutions and the authoring and publication of numerous academic and cultural works, including about forty books written by him, the deceased, who had a righteous-seeker heart, propagated and promoted the teachings of Quran and AhlulBayt (a.s.) among Indonesian and neighboring countries Muslims.

Late Jalal al-Din Rahmat was one of enthusiasts of late Imam Khomeini and Islamic Revolution (of Iran), who guide many lovers’ hearts to the teachings of Imam Khomeini, Supreme Leader Ayatollah Khamenei and great thinkers like Martyr Mutahhari.

The researcher and moral scholar, was also a prominent member of the AhlulBayt (a.s.) World Assembly, who competently considered the ideas of proximity between religions, and his activities influenced the entire region of Southeast Asia.

On behalf of all the members of this assembly, I extend my condolences on demise of that Mujahed figure to the Imam Mahdi (a.s.), the Supreme Leader Ayatollah Khamenei, Muslim scholars, followers of the AhlulBayt (a.s.) and the Indonesian academic and seminary community, as well as students, enthusiasts, his relatives - especially his esteemed and honorable son, Dr. Meftah Rahmat.

For the pure soul of that dear professor and also for his honorable wife, Hajiyeh “Evis Kartini” - who also passed away a few days ago - I ask God Almighty for the exaltation, and resurrection with the Holy Prophet (p.b.u.h) and Hazrat Zahra (a.s.), and I pray for patience for all of his relatives and acquaintances.

It should be mentioned that Dr. Jalal al-Din Rahmat, the chairman of AhlulBayt (a.s.) Society of Indonesia (IJABI), former representative in country’s Parliament, passed away on Monday February 15, 2021 at the age of 72 due to Covid-19. He was a prominent member of the AhlulBayt (a.s.) World Assembly and was considered as one of moderate and popular figures of Indonesia Muslims.

Four days earlier, the wife of the late Jalal al-Din Rahmat, Hajiyeh “Evis Kartini”, had died of the Covid-19 too.