Top duty of the clergy is to become jurist in religion/ The necessity of preserving old seminary traditions: Ayatollah Ramazani

Regarding the society’s expectations from the clergy, the Secretary-General of the AhlulBayt (a.s.) World Assembly stated, “People expect the clergy to learn religion well and teach it correctly and comprehensively.”

ABWA Official Website - On Thursday, November 10, 2022, the representative of the people of Gilan Province in the Assembly of the Leadership Experts and the Secretary-General of the AhlulBayt (a.s.) World Assembly gave a speech in the gathering of new female clergy from Gilan Province at the Narjes Khatun complex in Qom. 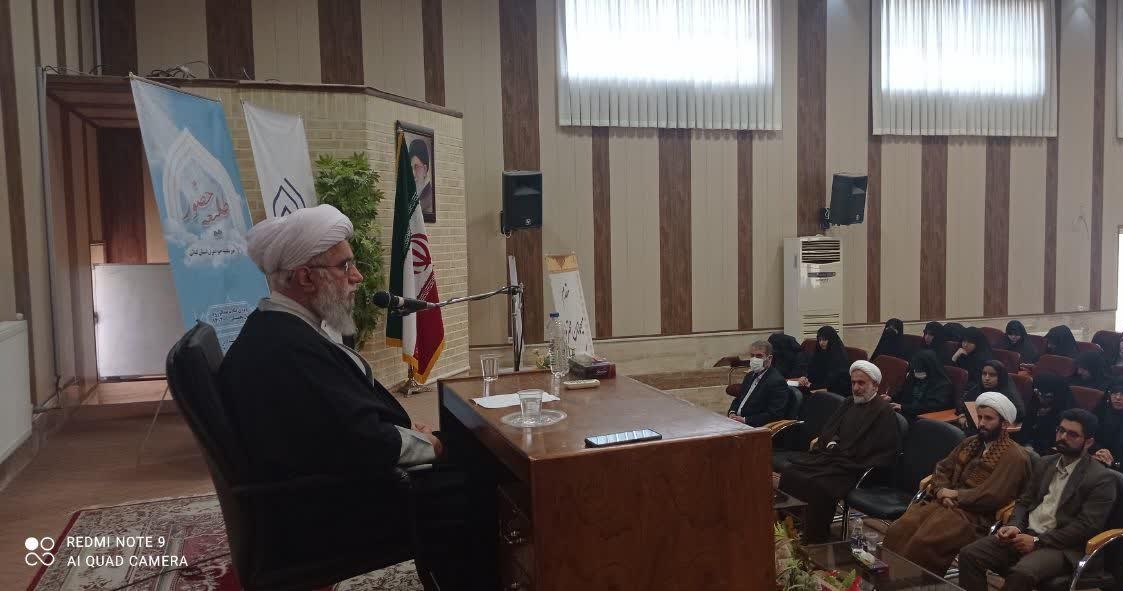 In this meeting, Ayatollah Reza Ramazani addressed the female students and stated, “Serving Islam and being a soldier for Imam Mahdi (a.s.) is a great honor, and you should be grateful to God for this blessing. In this way, try to increase your knowledge and love towards Imam Mahdi (a.s.). Because the higher the level of knowledge, the greater this love. We should also know what Imam Mahdi (a.s.) expects from us in order to walk in this direction.”

About the duties of the clergy, the representative of the people of Gilan province in the Assembly of the Leadership Experts said, “According to the Quranic verses and hadiths, our first duty is to become jurists in religion, and to learn religion in a deep way. We must know the Islam, believe it and be faithful to it. Imam Sadeq (a.s.) says, “Whoever learns knowledge for God’s sake, practices it for God’s sake, and teaches others for God’s sake, he will be remembered with greatness in the kingdom of heaven.”

“We must learn the Islam accurately, comprehensively, and deeply. If we know religion in this way, we will be able to teach it better. Therefore, our learning must be correct first, in which case, consequently our teaching will be correct. On the other hand, if we learn religion for God and practice it, we will learn things that are divine and cannot be achieved with a teacher,” he said, providing further explanations.

Stating that if a person is adorned with good morals, then he also adorns the society with virtues, the professor of higher levels of seminary added, “One of the seminary professors said that there are three types of politeness: “politeness with soul”, “politeness with others”, and “politeness with God”. The meaning of “politeness with God” is that we should consider ourselves in the presence of God and behave ourselves and not let our eyes, ears and tongue go out of control. We must also be careful that the knowledge we learn does not make us arrogant. In terms of moral effects, it can be said that knowledge has three stages: The first stage is arrogance. Some people become arrogant when they learn something. The second stage is humbleness, and in the third stage, a person understands that he does not know anything.”

On the expectations of the society from the clergy, Ayatollah Ramazani mentioned, “People expect the clergy to learn Islam well and teach it correctly and comprehensively. In this regard, it is important to pay attention to the old customs and traditions of the seminary, and it is necessary to preserve and continue the traditions. Old seminary traditions such as discussion, study before class, study immediately after class, respect for the lessons and the teacher, attending the class before the teacher, etc. should be considered in seminaries.”

“No matter how old you are, ethics are important. Because ethics determines the path of humanity. Therefore, we must first practice ethical preaching in ourselves. Because a person may be a good teacher but doesn’t have moral character,” he said on the importance of studying ethics.

“Knowledge is the life of the heart and gives peace to the inner being of man. According to the Prophet (p.b.u.h), Knowledge brings hearts from ignorance to life. If the heart of a person comes to life, he will be insightful and everything will be clear for him,” said the representative of the people of Gilan Province in the Assembly of Leadership Experts about the importance of knowledge.

“In order to empower the clergy, seminary schools’ principals need to teach them skills such as teaching, studying, learning the Quran, teaching the Quran and giving lectures and preaching,” he said, addressing the principals.

“More attention should be paid to consulting in scientific, educational and ethics fields in the seminaries. Also, talents in the field of knowledge and ethics should be well identified,” Ayatollah Ramazani continued.

In the end, on the factors of human felicity, he concluded, “Trust (in God), appeal (to AhlulBayt) and planning in the path of felicity, should be taken into consideration. The Supreme Leader has advised the youth to study, self-purification, and exercise.” /345/