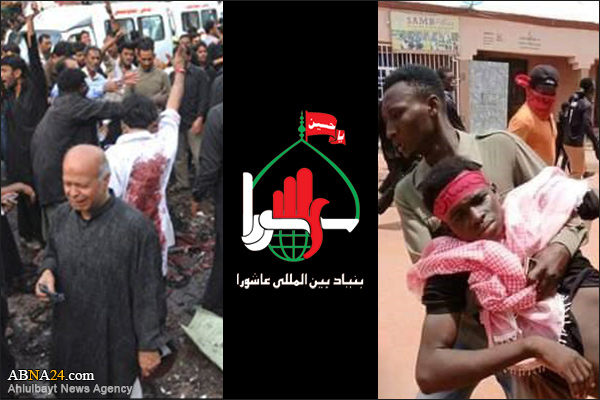 In a statement, the Ashura International Foundation condemned the attack on Husseini mourners in the Pakistani city of Bahawalnagar and the Nigerian city of Sokoto on Ashura Day.

A part of this statement reads, “The Ashura International Foundation calls on the Pakistani and Nigerian authorities to arrest the perpetrators of this crime and punish them severely. It also calls on the two countries to protect mosques, Takayas and mourning processions during Muharram and Safar, and by taking security measures, to prevent terrorist operations.” The brutal and criminal attack by Wahhabi Takfiri terrorists on the mourning processions of the Master of Martyrs, Imam Hussein (a.s.) in Bahawalnagar, Punjab, Pakistan, and the Nigerian military attack on Husseini mourners in Sokoto, Nigeria on Ashura, saddened the Islamic world and worried humanity.

These two heartbreaking tragedies - coinciding with the anniversary of the martyrdom of Imam Hussein (a.s.), his honorable family and companions - by the followers of Yazid in the present time, show the continuation of takfiri and sectarian ideas in these two countries, and at the same time, the vindictive cruelty of the agents of traitorous Wahhabism. By abusing these bloodthirsty takfiris, the enemies of Islam and their mercenaries have sought to destroy the atmosphere of unity and peace among Muslims, and this time, they were able to target the Islamic community in Pakistan and Nigeria.

Strongly condemning the two incidents, expressing condolences to the families of the Bahawalnagar and Sokoto martyrs and expressing solidarity with the injured in the two incidents, the Ashura International Foundation calls on the authorities of Pakistan and Nigeria to arrest the perpetrators of these crimes and punish them severely. The foundation also calls on the two countries to protect mosques, Takayas and mourning processions during the month of Muharram and Safar, and by taking security measures, prevent terrorist operations.

The foundation also calls on the international community and human rights organizations around the world not to remain silent in the face of repeated terrorist attacks against followers of the AhlulBayt (a.s.) school in Pakistan and Nigeria, and to condemn these crimes, and also to take continuous measures against the perpetrators, organizers, financial and weapons supporters of these takfiri groups - as well as the anti-Islamic forces in the Nigerian army - and to take necessary preventive and legal measures.

Condoling the tragic martyrdom of the followers of AhlulBayt (a.s.) in Pakistan and Nigeria, and wishing immediate recovery for the injured in these two incidents, the Ashura International Foundation calls on God Almighty to always raise the banner of justice and anti-tyranny of Imam Hussain (a.s.) in the world and to disgrace the criminals in this world and the hereafter.

And soon will the unjust assailants know what vicissitudes their affairs will take! (Ash-Shu'ara, 227)