Chairman of the Council of Shiite Ulama of Afghanistan, said, “The martyrs of the Sayed Al-Shuhada Girls’ High School in Kabul were the followers of the school of Ashura and Imam Hussein (a.s.). These oppressed children were torn to pieces. Throughout history, such a crime is either rare or unparalleled. The successive attacks on Afghan Shiites are not accidental.” 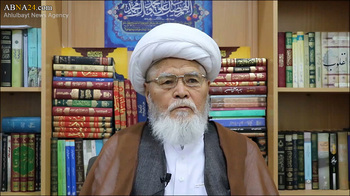 Referring to the martyrs of the Kabul terrorist incident, Ayatollah Mohammad Hashim Salehi Modarres, Chairman of the Council of Shiite Ulama of Afghanistan, said at the ceremony, “In this terrorist attack, 84 innocent girls were martyred, and about 200 people were injured. This terrorist incident was very suffering and severe. While meeting with the families of the martyrs and the wounded, representatives of the Council of Shiite Ulama observed that some of these families were so poor that they did not even have a home to live in, and lived in a room without a door. They often lived at the foot of the “Chehel Dokhtaran” (Forty Girls) mountain and were deprived of the basic facilities of life. The family of one of the martyrs said that their daughter’s body was identified through carpet weaving effects on her hands. Another family said their daughter had performed Ghosl (of Shahada) at dawn on the day of the terrorist attack, saying, “Today is the last day of my life”.”

“The martyrs of the Sayed Al-Shuhada Girls’ High School in Kabul were the followers of the school of Ashura and Imam Hussein (a.s.). These oppressed children were torn to pieces. Throughout history, such a crime is either rare or unparalleled. The successive attacks on Afghan Shiites are not accidental, and our enemy, who is the enemy of Islam and humanity, targeted our people with prior preparation. Our people have a brilliant history, and according to Grand Ayatollah Hakim, “I have seen less like the people of Afghanistan, a religious people who love Source of Emulation and Ulama.” The people of Afghanistan have a brilliant record of adhering to Islam, participating in jihad, learning science, and promoting culture,” he continued.

“Our people are peace-loving people and have lived as brothers with all the other brothers in Afghanistan. The first motive for attacks on schools, mosques, hospitals, and universities in Afghanistan is to create religious divisions. But our people are smarter than to fall into this trap. Throughout history, the Shiite people of Afghanistan have not fought with their Sunni brothers. The people of other countries should learn from Afghanistan’s people that we did not have a Shiite-Sunni war in the country. The enemies of Islam stir up discord in Afghan society in order to prevent the growth of talents and scientific prosperity,” he added.

“One of the reasons for the crimes against the country’s Shiites is the weakness of the security organizations. They do not arrest the perpetrators of these crimes, and they do not bring them to justice. This causes the criminals to commit crimes again. The lack of a unified leadership for the Shiites of Afghanistan is one of the reasons for the crimes against them. Officials must prioritize the interests of society over individual and ethnic interests. As long as the Shiites of Afghanistan don’t unite and every one pursues only the interests of his party, this tragedy will not be removed from our people,” said Ayatollah Mohammad Hashem Salehi Modarres, referring to the weakness of Afghanistan’s security organizations.

“The political ingenuity and cohesion of the leaders in the Shiite community of Afghanistan are very important, and if this cohesion is achieved, the crimes against our nation will end. Economic affairs, drugs, and addiction are other important issues,” he continued.

“Our leaders must take the right actions and make a joint decision. They should all be one voice and one word and have only one wish and one action. The nation also must follow them. The Shiite people of Afghanistan are very displaced, but they love peace,” noted the Chairman of the Council of Shiite Ulama of Afghanistan.