The martyrdom of Afghan Shiite girls wounded the hearts of the Islamic Ummah: Ahmadi Tabar

The Deputy of Cultural Affairs of the AhlulBayt (a.s.) World Assembly, hojat al-Islam Ahmad Ahmadi Tabar, “The tragic martyrdom of these martyrs wounded the hearts of the Islamic Ummah. A group of students in western Kabul was attacked by terrorists, and the Muslim Ummah mourned.” 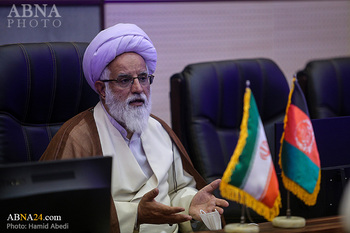 On Monday, May 17, 2021, a scientific meeting entitled “Study of the legal aspects of the terrorist attack on the Sayed Al-Shuhada (a.s.) school, west of Kabul” was held by the AhlulBayt (a.s.) World Assembly, in the conference hall of the Assembly in Qom.

At the beginning of the meeting, the Deputy of Cultural Affairs of the AhlulBayt (a.s.) World Assembly, Hojat al-Islam Ahmad Ahmadi Tabar, expressed his condolences on the martyrdom of Afghan Shiite schoolgirls, and said, “The tragic martyrdom of these martyrs wounded the hearts of the Islamic Ummah. A group of students in western Kabul was attacked by terrorists, and the Muslim Ummah mourned.”

“The Afghan authorities must establish peace and security throughout the country,” he continued.

“After the defeat in Afghanistan, Soviet troops withdrew from the country. Then, clashes broke out between various Afghan groups until the Taliban emerged. Shortly, the group was able to take control of many areas in Afghanistan. After a while, it became clear to the people of Afghanistan, both Shiites, and Sunnis, that not all members of the Taliban were pro-Islamic and did not pursue Islamic goals,” Ahmadi Tabar said, referring to the contemporary history of Afghanistan.

“When we look at the history of the Taliban, we come to Deobandi schools. During the British colonization of the subcontinent, they concluded that to succeed, they had to set up barracks in seminaries. In seminaries, students were introduced to military principles in addition to the curriculum so that the colonialists could later use them as infantry. In the recent past, we have witnessed peaceful coexistence between sects in the region. But over the past decades, groups such as the Sipah-e-Sahaba have emerged. The Taliban were established in Afghanistan after the withdrawal of Soviet troops,” he added.

“The enemies concluded that the United States could no longer be present in the region (West Asia), and had to leave Afghanistan. So, they are using the Takfiris to destabilize Afghanistan so that the people of the country will be forced to ask foreign forces to stay in Afghanistan. Although foreign forces ostensibly came to Afghanistan to provide security, their goal was to plunder the country. Afghanistan is one of the richest countries in the world and there are many resources and mines in this country,” continued the Deputy of Cultural Affairs of the AhlulBayt (a.s.) World Assembly.

Referring to the withdrawal of US troops from Afghanistan, Ahmadi-Tabar said, “Before this withdrawal, the terrorists carry out large-scale terrorist operations. Anyone with a bit of compassion cries for hours for this crime, but the West and the Western media, which claim to defend human rights, are indifferent to the crimes of terrorists in Afghanistan.”

“The events in Palestine overshadowed the martyrdom of Afghan girls. This scientific meeting about the martyrdom of these girls is held to examine the legal aspects of the attack on the Sayed Al-Shuhada (a.s.) school. The Afghan brothers must be active all over the world, including the United States and Europe, and make public demands of international institutions to respond to this crime. Afghan schoolgirls were martyred as children and their martyrdom left a scar on the hearts of the Islamic Ummah in Afghanistan. The various dimensions of this issue should be examined and the media should be used in this regard. To reflect the oppression of these martyrs in the world, we must make maximum use of cyberspace. The people of Afghanistan are under attack due to their beliefs,” he continued.

“Afghanistan’s Shiite community has been oppressed, and many of the country’s Sunnis may agree with the Shiites. The different ethnicities and religions in Afghanistan must empathize with each other to witness a prosperous and free Afghanistan in which everyone can coexist peacefully, and a people’s government based on all ideas and thoughts in Afghanistan is in power,” added the Deputy of Cultural Affairs of the AhlulBayt (a.s.) World Assembly.