Commemoration ceremony for Sheikh Abdillahi Nasir to be held

The commemoration ceremony of the Kenyan member of the General Assembly of the AhlulBayt (a.s.) World Assembly will be held on Tuesday in the form of a webinar and in person.

On the occasion of the demise of the divine scholar, the preacher of the teachings of the Quran and AhlulBayt (a.s.) in East Africa, and Kenyan member of the General Assembly of the AhlulBayt (a.s.) World Assembly, Sheikh Abdillahi Nasir Juma, a commemoration ceremony will be held online and in person.

The ceremony also will be attended by the African scholars of the seminary of Qom, and their articles will be read.

It will also be broadcast live from Abarat Internet TV, and the virtual Majalis page of ABNA News Agency on Instagram. 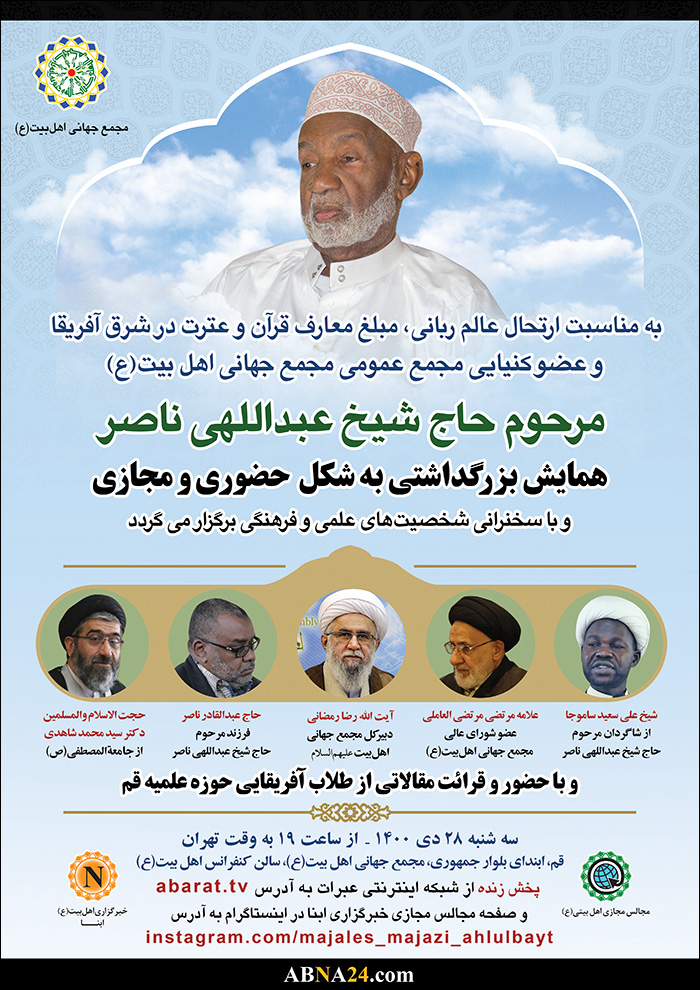 Abdullahi Nasser Jumaa was born in 1932 in Mombasa, Kenya. His family was known as the cradle of scholars, poets, and teachers.

After religious studies, as a preacher and teacher he promoted and taught Islamic teachings, and simultaneously was active in literary, media and political fields.

As a young man, he was an activist in the Kenyan independence movement from British colonial rule from 1957 to 1963, and after the movement won, he attended a historic constitutional conference at London’s Lancaster House, set up for independence from the British Empire.

A former prominent Mombasa Sunni preacher and scholar, Abdullahi Nasser converted to Shiism in 1975. In an interview, on the reasons of his conversion to Shiism, he said,” I became acquainted with the virtues of Imam Ali (a.s.) and gradually felt that Ali ibn Abi Talib (a.s.) is the greatest Muslim after the Prophet Muhammad (p.b.u.h). Then, I received the book Al-Ghadir, written by the late Allameh Amini. After reading the first volume, I realized the legitimacy of the Shiites. Then I went to the Shiite Mosque, and after that I read a lot of books and finally, I became a Shiite.”

After becoming a Shiite, by writing numerous books during his blessed life, Haj Abdullahi Nasser played a lasting role in spreading the teachings of the AhlulBayt (a.s.) and educating many in Kenya and neighboring countries.

He established the seminary of Imam Ali (a.s.) in Mombasa, in which, hundreds of clerics from Kenya and neighboring countries were trained in the highest levels of knowledge and religion and spread Islamic and Shiite teachings among their people.

Also, over the past few decades, with his vast knowledge of the Islamic history and the principles of Shiite beliefs, the prominent scholar held numerous debates with Wahhabi scholars in Kenya and defended the school of AhlulBayt (a.s.).

The late Abdullahi Nasser wrote more than 25 books and pamphlets about Islam and Shiism in Swahili, some of which have been translated and published in English and Rwandan. Among the valuable books he wrote on Shiite beliefs are the following:

- The Shiites and the Quran

- The Shiites and Hadith

- The Shiites and the Companions

- The Shiites and piety

- The Shiites and the Imamate

The book “Shia and Taqiyya” is one of his prominent works in response to a book published forty years ago by Moheb al-Din Khatib, entitled “General Lines” in Arabic, and 10 years ago as “Roots of the Shiite Religion” in Swahili, which had raised doubts among Muslims in Africa. In “Shia and Taqiyya”, the late Abdullahi Nasser deals with the concept of Taqiyya from the Shiite point of view. About his book he said, “Given the doubts that have arisen about the issue of Taqiyya in Africa, I considered it necessary to prepare this book and make it available to the public, so that, firstly, the doubts that has arisen can be removed, and secondly, the people can become familiar with the issue of Taqiyya.”

This book has four chapters which are as follows:

2- The problems of the Shiites during the time of the Umayyads and the Abbasids;

3- Taqiyya from the Sunnis point of view;

4- Taqiyya from the Shiite point of view.

Also, the series of Sheikh Abdullahi Nasser’s speeches in the form of cassettes and audio-visual files is still distributed among the Muslims of Kenya, especially in the Indian Ocean coast areas. These speeches have been one of the motivating factors for the natives of Africa to convert to the religion of the AhlulBayt (a.s.), and turn them away from extremism and takfiri ideas.

During his life, the Wahhabis and their affiliates carried out many activities against him and tried to turn him away from Shiism through bribery and threats, but they failed.

The late Abdullahi Nasser was for a time the representative of the city of Mombasa in the Kenyan parliament and was very popular among the people.

He also served as a member of the General Assembly of the AhlulBayt (a.s.) World Assembly in this international non-governmental organization, and by participating in various national and regional meetings and conferences, he influenced Islamic intellectuals and scholars in East African countries.

Self-respect, dignity, moderation, and abundant moral virtues made this divine and insightful scholar a spiritual role model for young people.

In the last years of his blessed life, he was translating and interpreting the Holy Quran into Swahili, and finally, after a lifetime of research and promotion of the teachings of Thaqalayn (Quran and Ahl al-Bayt), he passed away on Monday, January 11, 2022.

His body was buried in Ganjuni Shrine in Mombasa after the funeral by mourning believers.