The Secretary-General of the AhlulBayt (a.s.) World Assembly emphasized, “Today, the Resistance has become an international and global flow, and Haj Qassem is a martyr of the resistance in the international arena.” 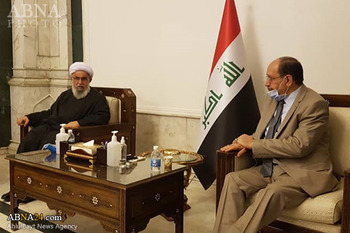 In this meeting, on the issue of resistance in Islam, Ayatollah Reza Ramazani stated, “The Quranic verses refer to resistance and jihad, and these issues can be explained based on rational arguments.”

“Today, the Resistance has become an international and global flow, and Haj Qassem is a martyr of the resistance in the international arena.” emphasized the Secretary-General of the AhlulBayt (a.s.) World Assembly.

“The arrogant flow expends a lot much in Bahrain, Iraq, and Afghanistan, but failed to achieve the result. In contrast, the resistance movement emerged as a global power. National and international unity can contribute to strengthening the flow of resistance. Therefore, it is necessary for us to try to introduce Islam comprehensively, accurately, and deeply. Islamic scholars also must be diligent in theorizing this thought,” he said, regarding the successive defeats of the arrogant flow in the world.

“We consider resistance to be the same as divine rationality and mercy, and all human society should benefit from this mercy,” stated Ayatollah Ramazani.

“Islamic unity should not be seen as a tactic, but as a method. Unity is a Quranic method attributed to the Ahl al-Bayt. Also, extremism must be confronted, from all walks of life, whether Shiite or Sunni,” he said, regarding the need for Islamic unity.

“Those in charge of religious policy must seriously consider the principles and foundations of politics. Also, the Machiavellian view, which exists in some Islamic countries, must be hated and confronted,” said the Secretary-General of the AhlulBayt (a.s.) World Assembly in another part of his speech.

“You have proved in practice that in order to achieve the lofty goals, you pay attention to the unity of Iraq and are subject to the Marjaiat. These cases show that you follow Velayat and authority. You accepted the responsibility to serve and develop the culture of the AhlulBayt (a.s.) as a trust,” he said addressing Nouri al-Maliki.

“The world has turned to political and social Islam, and to attract human societies we can provide the world with the most accurate concepts. Today, there is no room for experimentation and risk-taking, and our smallest mistake may be a threat in the way to achieve the great results,” stated the Secretary-General of the AhlulBayt (a.s.) World Assembly.

“Today, we are in the midst of a great movement, and we want to step on the path of Islamic civilization, and more importantly, we want to use all this as a prelude to the Advent of Imam Mahdi (a.s.). On the other hand, the most important element of Advent is the realization of justice in human societies. Imam Khomeini said in this regard that we act according to the verse “أَنْ تَقُومُوا لِلَّهِ مَثْنَى وَ فُرَادَى” (that you rise up for Allah’s sake, in pairs or singly) (Quran, Sura Saba’, verse 46), the dignity of Muslims will be achieved,” he said in the end.

In Iraq, the enemies seek to create Shiite-Shiite sedition: al-Maliki

Following the meeting, Nouri al-Maliki, the former Iraqi Prime Minister, and a member of the General Assembly of the AhlulBayt (a.s.) World Assembly said, “In the past, some people called politics najis (unclean), believing that it is enough to go to mosques, and we should only deal with the worship rules of Islam. But the period of these words is over.”

“In the history of the beginning of Islam, we read that in the time of the Prophet Muhammad (p.b.u.h), Al-Masjid an-Nabawi (Prophet’s Mosque) was the center of government and decisions for peace and war. Also, the economic decisions were made in the mosque,” he continued.

“According to the hadiths, if a Muslim hears the voice of an oppressed Muslim, he should respond to that voice, and help the oppressed, and this is not possible without entering the field of politics. Helping the oppressed people of Palestine is possible only through entering politics,” added the former Iraqi Prime Minister.

“In Iraq, the enemies are seeking to create a Shiite-Shiite sedition to hit the Shiites of the country,” said Nouri al-Maliki, referring to the events in Iraq.

“Today, we are witnessing victories that we did not even imagine achieving before. One of these victories was the victory of Gaza in the recent battle against the Zionist regime,” he said.