The Secretary-General of the AhlulBayt (a.s.) World Assembly stated, “The desired society according to the Quran is a society that has knowledge and awareness. If a society is on the path of ignorance, its people cannot find the purpose of their lives.” 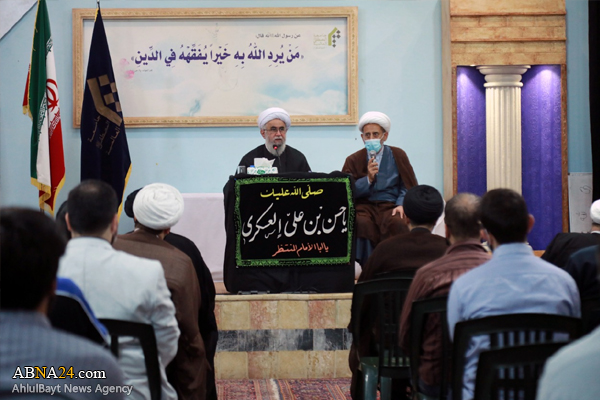 During his visit to Lebanon, the Secretary-General of the AhlulBayt (a.s.) World Assembly visited the branch of the Al-Mustafa (p.b.u.h) International University in the country, on Friday morning, October 15, 2021.

In a meeting with the students of Al-Mustafa (p.b.u.h) International University, while offering condolences on the anniversary of the martyrdom of Imam Hassan Askari (a.s.), Ayatollah Reza Ramazani appreciated the efforts of Dr. Mahdavi Mehr, the branch manager of the university in Lebanon.

“You spend the best time of your life in this place,” he said about the favorable society according to Quran, addressing the young clergies, “The desired society according to the Quran is a society that has knowledge and awareness. If a society is on the path of ignorance, its people cannot find the purpose of their lives.”

“Knowledge is the arena of discovery, and as man goes along the path of learning he discovers new issues. Therefore, in seminaries, clergies should seek a knowledge that addresses the intellect and the heart,” added the Secretary-General of the AhlulBayt (a.s.) World Assembly.

“According to the teachings of the AhlulBayt (a.s.), knowledge is not acquired only through education and training, but true knowledge is the light that God shines on the human heart. Some people study for many years, but no light would shine on their hearts. While some people reach that light with a few years of study. If knowledge is supposed to be a burden for human beings, it is useless. Rather, knowledge should be a help to human beings. As Imam Ali (a.s.) said to Kumayl ibn Ziyad, “Knowledge is the greatest jihad.” We do not come to the seminary to carry knowledge like a burden, but the goal is to show the way to others,” he emphasized. “We Should prepare ourselves to be polite, but God is truly polite. Prerequisites create ability in man, and then God grants us virtues,” said the professor of the higher levels of the seminary of Qom.

“Self-discipline, human discipline, and the creator’s discipline are the three stages of discipline from Imam Ali’s (a.s.) point of view in sermon 184 of Nahj al-Balagha,” he added, “According to Imam Khomeini, “Eyes, tongue, ears, hands, feet, abdomen, and sexuality are the seven soldiers who must be properly disciplined.”

“Just as knowledge is not easily acquired, so is having humanity. Man must try to discipline himself. We should try to wake up half an hour before the morning call to prayer, even if we do not say Night Prayers. According to one of our mentors, “(Wake up in the time of Night Prayers) and ponder, even if you do not say Night Prayers.” Many (spiritual) things are distributed during these hours. Ayatollah Javadi Amoli says, “There are Arsh Azim and Arsh A’zam. The Arsh A’zam is the human heart, and God is in broken hearts,” he continued.

“According to Ayatollah Javadi Amoli, “(during the time of Night Prayers) put your right hand on your heart and say, “سبحان الله و الحمدلله و لا اله الا الله و الله اکبر.” Say this dhikr as many times as you can. You will reach peace, and you will be able to resist enemies and lusts,” Ayatollah Ramazani said in the end.