For martyrs, battlefield was field of self-purification/ Resistance ideal of all divine prophets: Ayatollah Ramazani

Stating that the thinking of the martyrs was always free from all kinds of material and ungodly matters, the Secretary-General of the AhlulBayt (a.s.) World Assembly stated, “The martyrs saw the battlefield as a field of self-purification, and this led to their victory.” 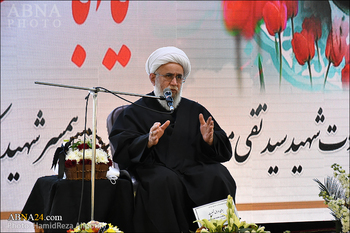 On Wednesday, January 5, 2022, at the commemoration ceremony for the anniversary of martyr Sayed Taqi Mesbah in the graveyard of the martyrs of Rasht, noting that the martyrs were the manifestation of patience and resistance in various fields, Ayatollah Reza Ramazani stated, “The martyrs on the battlefield have been fighting against carnal desires, that is, the Great Jihad.”

“The martyrs did not go to the battlefields to reach the positions and office. Rather, performing their religious duty was their most important goal,” added the Secretary-General of the AhlulBayt (a.s.) World Assembly.

“The purpose of the martyrs of going to the battlefields was to perform their religious duties,” he clarified, “To this end, the martyrs have always been victorious.”

“The battlefields and war were the fields of self-training and self-purification,” Ayatollah Ramazani emphasized, pointing out that God created man to walk in the monotheistic system and purify himself.

“The inner knowledge is the spirituality, rationality, justice, etc., and that man should not immerse himself in the material world and various things,” added the representative of the people of Gilan in the Assembly of Experts, “The martyrs reminded people of God and added to our religious consciousness.”

“The martyrs wanted a share in serving the people, not in worldly affairs and positions,” he stated.

“The martyrs saw the battlefield as a field of self-purification, and this was the reason for their victory,” Ayatollah Ramazani said, stating that the martyrs were always free from all kinds of material and ungodly matters.

“We should consider our duties as worship,” the Secretary-General of the AhlulBayt (a.s.) World Assembly emphasized, “The martyrs were the manifestation of resistance on the front of the Great Jihad (against carnal desires). Our martyrs tried to follow the divine rites.”

“Man cannot progress until he wins the inner battle and trample on his carnal desires,” he mentioned, “Many today pretend to do good. While now is not the time for these pretenses, rather we must purify ourselves.”

“The divine prophets were sent to establish justice, and this is not possible without resistance,” the representative of the people of Gilan in the Assembly of Leadership Experts added, “Wherever the resistance became insignificant, justice weakened. To achieve justice, one must be patient and resist.”

“Prophets like Noah and Jonah could not establish justice because the conditions were not right. But prophets like Moses, Solomon, and David were given the opportunity to establish justice,” he clarified, pointing out that resistance has been the ideal of all divine prophets.

“Being in a position and office means participating in a competition to serve the people,” Ayatollah Ramazani pointed out, “Whoever is in the office should apologize to the people wherever needed.”

“Unfortunately, some people in the cyberspace easily discredit people and slander them. Of course, these people must be accountable before God,” the Secretary-General of the AhlulBayt (a.s.) World Assembly said, referring to some content in cyberspace.

“Martyr Soleimani was the most national and international figure in Islamic Ummah,” he said, “The general was a mystic and a truth-seeker. He always maintained balance in his behavior and speech.”

“The martyrs also went to jihad battlefield with the same idea,” Ayatollah Ramazani pointed out, “Some, however, use their presence on the battlefield to get new posts, which is not a good thing.”

“Today’s battlefield is jihad for construction in the country,” the Secretary-General of the AhlulBayt (a.s.) World Assembly said, “Although we have many problems, we should not miss opportunities.”

“Pure souls have been sacrificed for the Islamic Revolution. Procrastination in the affairs of the Revolution is not permissible at all,” Ayatollah Ramazani clarified, “The seedling of the Revolution has borne fruit. Therefore, it has resisted in the international arena and has not given up.”

“Sometimes the enemies speak in the language of freedom of expression and human rights, and we are deceived. We must all be vigilant in this regard,” the Secretary-General of the AhlulBayt (a.s.) World Assembly said, referring to the need to know the enemy.

“On the Day of Judgment, the responsibility for respecting the rights of the people is much greater than the rights of God” he concluded, emphasizing the importance of human rights.