Increasing spirituality of officials will increase their sense of justice, reform: Ayatollah Ramazani

Pointing out that having a position in the Islamic system today means participating in the spirituality contest, the Secretary-General of the AhlulBayt (a.s.) World Assembly said, “Increasing spirituality in officials increases their sense of justice and reform.” 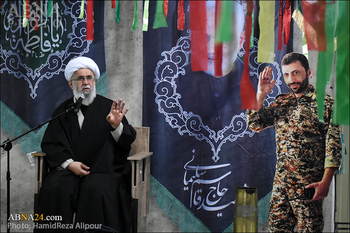 On Wednesday, January 5, 2022, at the martyrdom ceremony for Lady Fatimah Zahra (a.s.), the memorial of the border guard martyrs, and the anniversary of the martyrdom of General Soleimani, in the Naval Center of Bandar Anzali, Ayatollah Reza Ramazani stated, “In Quranic verses and hadiths, man is introduced as a creature in pursuit of meaning.”

Stating that human nature and inner talents have made him a being beyond the materialistic issues, the Secretary-General of the AhlulBayt (a.s.) World Assembly added, “Among human talents is intellectual and moral talent that leads him in search of truth and invites him to higher levels.”

“Prayer, as a part of this spirituality, is a real manifestation of the inner bow to God,” pointed out the representative of the people of Gilan in the Assembly of Leadership Experts, stating that spirituality should fill the entire life of human being.

“Spirituality is not just praying and going on Hajj. Rather, we must also manifest spirituality in the field of community, family and in relation to various areas of life, including education, eating and drinking, and so on,” he added.

Referring to the value of the activities and efforts of the border guards of Islamic Iran,

Referring to the value of the activities and efforts of the border guards of Islamic Iran, Ayatollah Ramazani emphasized, “According to the hadiths, the eyes that are awake in the middle of the night to guard the borders and maintain the security of the society will not cry on the Day of Judgment.”

“The spirituality of Islam is individual and social spirituality. Man must pay attention to God both in his personal affairs and in his social affairs. Spirituality is the foundation of justice in society,” pointed out the Secretary -General of the AhlulBayt (a.s.) World Assembly.

“Haj Qasem had a comprehensive spirituality in all aspects of life,” he stated, referring to Martyr Soleimani’s desire for martyrdom, and his spirituality.

“Haj Qasem’s position is not just because of his fight against ISIL. Rather, he had a great spiritual position as a person who is in pursuit of meaning,” Ayatollah Ramazani clarified.

“Why do we sometimes blame young people? It is we who could not understand the language of the youth. Sometimes we put pressure on them. Understanding youth literature is an important educational perspective,” added the Secretary-General of the AhlulBayt (a.s.) World Assembly, referring to the views of Martyr General Soleimani towards the youth.

“Once, the Supreme Leader of the Revolution called Martyr Soleimani the most national and international person in Islamic Ummah,” he added.

“The presence of various segments of society in the funeral procession of Martyr Soleimani and the holding of more than a thousand ceremonies after his martyrdom in India, is an example of what the Supreme Leader of the Revolution said,” Ayatollah Ramazani added.

“While trying to balance his positions, General Soleimani did not allow anyone’s rights to be violated in political and cultural matters,” pointed out the representative of the people of Gilan in the Assembly of Leadership Experts, saying that General Haj Qasem Soleimani was comprehensively and accurately trained and taught in the school of Lady Fatemeh (a.s.).

“Before saying the love prayer, Haj Qasem performed ablution whit blood,” he said, referring to the important letter of Martyr Soleimani to his daughter.

“Despite all the hardships he faced, he insisted in his will “On my gravestone just write the soldier of the Velayat”,” clarified Ayatollah Ramazani, referring to the difficulties that General Soleimani endured in maintaining the Islamic Republic.

“In addition to the fact that General Soleimani should be studied as a war commander, he should also be studied as a person who relied on God in wars and appealed to the Infallibles (a.s.),” stated the Secretary-General of the AhlulBayt (a.s.) World Assembly.

“General Soleimani’s relationship with the Supreme Leader of the Revolution was like the relationship between a student and a teacher, and this relationship was accompanied by kindness and affection,” he added, saying that the spirituality of Haj Qasrm should be studied.

“General Soleimani always said, ‘We are not murderers, rather, we seek to catch murderers, and we oppose oppression’,” said Ayatollah Ramazani, introducing Martyr Soleimani as the Commander of Peace.

“One of the most important characteristics of people who are awaiting and perform Jihad for Imam Mahdi (a.s.) is their spirituality,” added the Secretary-General of the AhlulBayt (a.s.) World Assembly, pointing out “Our society is thirsty for the kind of spirituality that Haj Qasem had.”

“Increasing spirituality in officials increases their sense of justice and reform,” said the Secretary-General of the AhlulBayt (a.s.) World Assembly, saying that having a position in the Islamic system today means participating in the spirituality contest.