We must introduce Resistance Theory under Rahmani Islam/The necessity for Intl. approach to the propagation of Quranic culture: Ayatollah Ramazani

The Secretary-General of the AhlulBayt (a.s.) World Assembly emphasized, “In the field of the international approach to Quranic culture, there are shortcomings and the content productions are somewhat Iranian and have a local perspective. While this issue should have an international approach and its literature should be changed, and this requires field knowledge in various areas.” 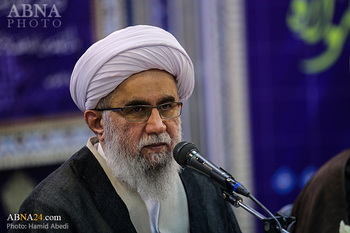 In an interview, emphasizing the need for an international view of the Holy Quran, the Secretary-General of the AhlulBayt (a.s.) World Assembly, Ayatollah Reza Ramazani stated, “This requires field knowledge in various areas.”

“If the Quran is to be taught in the international arena, there must be an international perspective in this regard, and it is necessary to be aware of several aspects of the issue. Today, there is a lot of talk about the Quran that is not true and even some people do not consider the Quran a book for life. One of these people, who is Iranian and has lived in the West for some time, wrote an article entitled “The Quran is not the law”. He considers the Quran to be a collection of advice and teachings which has no other issues. In some European and American countries, some believe that verses from the Quran that contains advice should be accepted and verses about war and jihad should be discarded. Even in some Islamic countries, the idea has been promoted that a series of verses of the Quran should be discarded,” he said, mentioning some points in this regard.

“Our answer to these people is that the language of the Quran is the language of reason and Fitra (innate nature) and is not dependent on time. The Quran can be a book for life for the past, present, and future. We must master the golden rules mentioned in the Quran. Like the verse “speak kindly to people” (Al-Baqarah: 83) or that this book is “an admonition for all humans” (Al-Muddaththir: 31), although those who benefit from it are the believers, this book is for all of humanity,” Ayatollah Ramazani said, in response to this group of people.

“In about 80 chapters of the Quran, the audience of the verses is “Al-Nas”, meaning Mankind, which is very important. Therefore, it is very good if we can deal with the Quranic areas with this approach,” stated the Secretary-General of the AhlulBayt (a.s.) World Assembly.

“One of the most important issues that the international section can work on is the issue of Resistance, the “the Theory of Resistance” in the Quran. About 400 verses in the Quran are about jihad and resistance. We believe that resistance is part of divine mercy. That is, the Prophet (p.b.u.h) introduces himself as the Prophet of Mercy, and in this regard, the Prophet refers to the field of resistance against authoritarianism. Today, this issue can be raised internationally. When someone attacks our country, we defend, and this defense is reasonable, that is, reason dictates that we must defend. Today, although some people raise the issue of Rahmani Islam (Compassionate Islam), they are unaware of the resistance under this category. These two are a fact that resistance is defined under mercy, that is, to prevent authoritarianism,” Ramazani continued.

“If we can introduce the Quran to the world from this perspective, we can achieve good results. Because in the field of contemplation, the contemplation contents must also be brought. The Quran also emphasizes it: “Do they not contemplate the Quran?”. Therefore, the book of God is the book of logic, reason, and Fitra (nature), and in general, religion has the same meaning and is based on Fitra (nature),” he added.

“If a person acts according to the content of the Quran, he will achieve some kind of physical health. In this regard, we need to harmonize with other organizations. Cognition must be achieved first, and then understanding, interaction, synergy, transformation, and promotion must be achieved. Therefore, IQNA news agency can use the content of different sections that exist in the AhlulBayt (a.s.) World Assembly to improve the productions, both quantitatively and qualitatively,” the Secretary-General of the AhlulBayt (a.s.) World Assembly said, stating that issues such as “Quran and psychology”, and “Quran and health” are good topics that can be addressed.

“Certainly, IQNA can be effective in publishing the Quranic culture with an international approach, and the glorious works that it is making can be promoted with the cooperation of the AhlulBayt (a.s.) World Assembly,” he said, expressing that he is in touch with IQNA and knows its capacities.

“In the field of the international approach to Quranic culture, there are shortcomings and the content productions are somewhat Iranian and have a local perspective. While this issue should have an international approach and its literature should be changed. For example, about the Imams, we have neglected a lot. Some consider the Imams to be only for Shia, while the Imams are not only for the Shiites but for all Muslims and even humanity. The Quran is “remembrance for mankind” and the Imams are “Imam of mankind”. Therefore, when we greet Imam Mahdi (a.s.), we say: “Peace be upon you or Imam of al-Ens (mankind) and the jinn”. That is, all of humanity is considered,” Ayatollah Ramazani added.

“For example, in the verse “speak kindly to people” (Al-Baqarah: 83), God does not say “speak kindly to the Muslims” or “speak kindly to the believers”. Or, for example, in the prayers we read daily, there is an international perspective. One of the infallibles (a.s.) says: “O God! Heal all the sick” and does not say: “Heal sick Muslims”. Because a disease affects everyone and for it, there is no difference between Muslims and non-Muslims. Or he says: “O God! Feed all the hungry”, means to feed every hungry person. Because even if a hungry person is a non-Muslim, it affects human society and is very important from an international point of view. But (unfortunately) these issues are less addressed,” he stated, citing another example.

“The Quran is the book of humanity and the book of man, that is, it fully introduces and recognizes human life to human beings. Therefore, in the field of content, we can get help from the content creators of the country and the seminary of Qom and the AhlulBayt (a.s.) World Assembly. We can also cooperate with the “World Forum for Proximity of Islamic Schools of Thought” in discussions related to proximity (between Shia and Sunni),” he emphasized.