The conference “Study of the priorities and strategies for disseminating the teachings of the AhlulBayt (a.s.) in the international arena; with emphasis on the Indian Subcontinent, Southeast Asia and Latin America regions” was held in the in Qom. 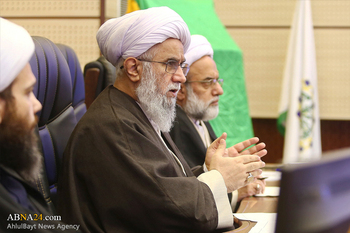 In this ceremony, while congratulating the Research Week, the Secretary-General of the AhlulBayt (a.s.) World Assembly stated, “Research is an important issue for change. It can play an important role in correctly explaining pure ideas and answering questions and doubts. It is especially important that the research is up to date, based on the needs of each society. If research is based on this criterion, we will see the growth of science and knowledge in various fields.”

“Given the intellectual anomalies in various fields, research should be based on the issues we face. It is necessary to pay special attention to the different characteristics of different countries,” he added.

The school of AhlulBayt (a.s.) needs to be introduced with persuasive approach

Regarding the importance of research in the AhlulBayt (a.s.) World Assembly, Ayatollah Reza Ramazani stated, “The AhlulBayt (a.s.) World Assembly can play an effective role in the teachings that are offered in the world today. By creating a change in the research system, we should be introduced as a research reference so that it is liked by the world. The activities of the Book Council, which specialize in fourteen disciplines, must be meticulously followed up. Those scholars from different countries should be invited that be able to properly introduce the school of AhlulBayt (a.s.) in today’s human society.”

“Some denominations introduce different areas of Islam with extremism approach,” the Professor of higher levels of the seminary of Qom added, “The path of introducing the school of AhlulBayt (a.s.) must be rational. The introduction of Islam must be accurate, comprehensive, and deep. Comprehensive introduction means individual and social spheres on one hand, and worldly and otherworldly dimensions on the other hand should be introduced comprehensively. Teaching and presenting concepts should not be superficial, and in this regard, we need to act carefully and deeply. With this view, Islam is a dynamic religion and can restore dignity to the Islamic society. Because Islam does not tolerate oppression in the social arena, it fights oppression, and it is spiritual.”

“All the precepts of Islam call us to spirituality, a broad spirituality that is responsible, neither opposed to responsibility, nor evasive from it. It should be noted that we are facing various crises today. Some young people suffer from a lack of a clear personal identity due to the lack of a deep look at the teachings of Islam. The school of AhlulBayt (a.s.) can answer all crises for today and tomorrow,” he emphasized.

If spirituality is supported by something other than religion, it will have no use

Referring to the crises in the Western world, Ayatollah Ramazani said, “The West is facing some crises. For example, more than a few thousand fake spiritualities have been created there. To get rid of parts of these crises, they must turn to religious spirituality. Because if spirituality is supported by something other than religion, it will have no use.”

“Today, crises in family relationships are due to distance from the pure teachings of the AhlulBayt (a.s.). The family crisis is a dangerous crisis that threatens the roots of humanity. In cyberspace today, attacks on families and the disintegration of families are pursued,” he added, referring to the family crisis in western societies.

“In publishing religious books, we must train professional writers who are native to the target community. It is necessary to train local experts in each region who are familiar with the language and literature of the environment,” he stated.

“Today, there is no comprehensive book for Westerners to get acquainted with Islam. The research should be according to the needs, and the comprehensiveness of the work should be considered. Propagating the teachings of the AhlulBayt (a.s.) must be defined in different levels. There is a need for books for different levels of the general public, youth, women, the elite, and so on, and to achieve these goals, special research must be done,” Ayatollah Ramazani said.

Traditional methods are necessary to propagate the teachings of Islam and the AhlulBayt (a.s.), but are not enough

Regarding the necessity of using cyberspace to propagate the teachings of the AhlulBayt (a.s.), he stated, “Traditional methods must be used to propagate religion. However, traditional tools are necessary, they are not enough. At one time, maybe a hundred people attended in religious session, but today, thousands of people can attend the religious meetings through cyberspace. In some conferences in India, three or four million people attend lectures virtually.”

Expressing some methods for spreading the teachings of the AhlulBayt (a.s.) in the international arena, the professor of the highest levels of the seminary of Qom stated, “In introducing the school of AhlulBayt (a.s.), one should not insist that the addressee must be converted to Shia. Rather, it should be insisted that we know the AhlulBayt (a.s.) school correctly and comprehensively and introduce it to the audience in the same way. Europeans should be told that Islam is not what they imagine and attribute to violence. Rather, Islam is full of love, amity, and rationality. If the introduction of Islam emphasizes the comprehensiveness of this religion, the people of the world will love it. Because Islam teaches people dignity, in the full sense of the word.”

“In one of my lectures in Vienna, I introduced Imam Hussain (a.s.) who rose up for humanity. After my lecture two residents of the city, who were Christians, said that with this view, Imam Hussain (a.s.) is also their Imam too. The Ashura has an important international capacity that must be considered in all its dimensions and should not be addressed only in one aspect. We could not comprehensively introduce the AhlulBayt (a.s.) to human society. If we had succeeded in this, no one in the West would have written the article that the “Prophet Muhammad (p.b.u.h) was a belligerent”. This is because they do not have a true analysis of the Prophet’s wars. The battles of the Prophet Muhammad (p.b.u.h) have been to preserve human dignity and to fight against tyranny and oppression” he added.

Islam must be introduced accurately, comprehensively, and deeply

The Secretary-General of the AhlulBayt (a.s.) World Assembly stated, “Some fail to introduce Islam and Imam Mahdi (a.s.) properly. A person in the West claimed in a speech that after the Reappearance of Imam Mahdi (a.s.), two thirds of the people of the world will be killed! This is while all the narrations that make such a claim are false.”

“We live in a good time to spread the teachings of Islam and the AhlulBayt (a.s.),” he emphasized, “We must introduce Islam to the world accurately, comprehensively and deeply and with the rationality that has come to us from the AhlulBayt (a.s.). For the African audience, we must say that the AhlulBayt (a.s.) rejected slavery for everyone except God; for the European audience, however, we must emphasize rationality, freedom, and dignity, which are the topics of the day. We need researchers in this regard, and we hope to see a new phase of research in various fields with the specialization of the Book Council.”