In a statement, the AhlulBayt (a.s.) World Assembly, the Afghanistan office, stated that he main responsibility for the Kabul airport bombing lies with those who caused the catastrophe, either due to poor management or intentionally. 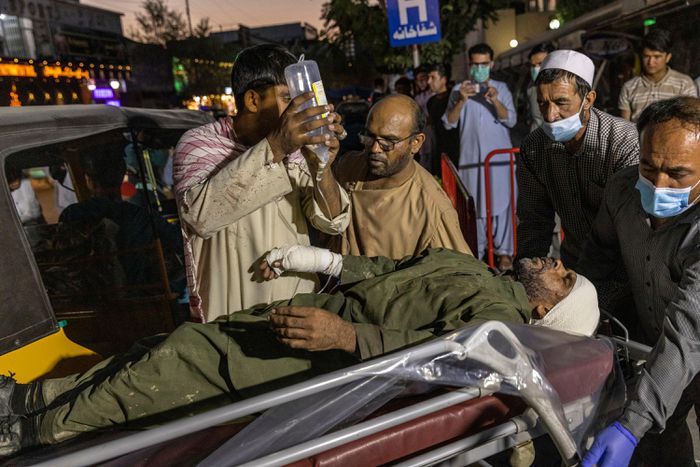 In a statement, the AhlulBayt (a.s.) World Assembly, the Afghanistan office, denounced the terrorist attack near Kabul Airport, Afghanistan.

The office stated that the main responsibility for the Kabul airport bombing lies with those who caused the catastrophe, either due to poor management or intentionally.

O you who believe! do not take for intimate friends from among others than your own people; they do not fall short of inflicting loss upon you; they love what distresses you; vehement hatred has already appeared from out of their mouths, and what their breasts conceal is greater still; indeed, We have made the communications clear to you, if you will understand. (Quran, Al Imran: 118)

More than two decades ago, US-led NATO forces entered Afghanistan under the slogan of eradicating international terrorism. As a result of America’s longest war, the United States and its allies conceded defeat. But the United States signed an agreement with the Taliban to withdraw from Afghanistan, and NATO troops also decided to leave Afghanistan following the US. These are the last days when foreign troops must leave Afghanistan completely and end the occupation of the country.

While inter-Afghan peace talks were under way, Ashraf Ghani’s escape from the country further complicated the peace process in Afghanistan, putting the country at risk of civil war. Following Ghani’s escape, disorder, oppression and looting began in Kabul.

There is no doubt that the United States, which suffered a disgraceful defeat, fled Afghanistan in humiliation. But recently, with the help of its allies, the US has plotted to deceive the public. The United States has announced through the media that it will provide asylum at Kabul Airport to rescue those whose lives are in danger. This seduction caused thousands of people to flock to Kabul Airport, and 20 people lost their lives due to the disorders.

The latest negative consequence of a dubious Western plot to save the lives of people at risk was a suicide bombing at Kabul airport that killed and injured more than 100 people. Although the ISIL terrorist group claimed responsibility for the blasts, the main responsibility lies with those who caused the catastrophe, either due to poor management or intentionally.

The AhlulBayt (a.s.) World Assembly, the Afghanistan Office, strongly condemns this act of violence and inhumanity and its perpetrators, and extends its condolences to the families and relatives of the victims of this tragic incident and prays for a speedy recovery to its injured.

It should be mentioned that on Thursday, August 26, 2021, 170 people, including 13 American soldiers, were killed in two suicide bombings near Kabul Airport.