Pointing out that doubts such as the inefficiency and illegitimacy of the Islamic system should be answered, especially in the media, the Secretary-General of the AhlulBayt (a.s.) World Assembly said, “The task of the revolutionary media is to respond to suspicions against the Islamic Republic.” 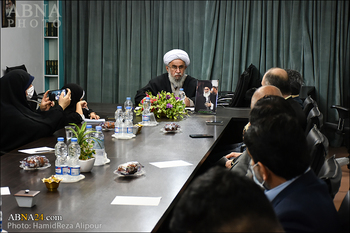 On Thursday, February 10, 2022, in a meeting with members of the media mobilization in Gilan province on the subject of media ethics, while pointing out that the statement of the second phase of the Islamic Revolution refers to ethics in various fields, Ayatollah Reza Ramazani stated, “A moral society is one in which people are adorned with moral behaviors.”

Referring to the deviant spiritualities in human society, the Secretary-General of the AhlulBayt (a.s.) World Assembly stated, “There are generally three types of spirituality: petrified spirituality, spirituality in which the man accept oppression, and worldly spirituality.”

“We must promote worldly and otherworldly spirituality according to principles,” he added, “Islamic spirituality pursues justice and the struggle against oppression, and those who follow this spirituality want to promote justice in society.”

“The month of Rajab is a good introduction to Sha’ban and Ramadan,” Ayatollah Ramazani pointed out, “To promote spirituality and morality, we must lay the groundwork, and the media can lay it.”

“The Supreme Leader considered the explanation jihad as the most important mission of the media today,” he said, “The enemies seek to make the achievements of the Islamic Revolution completely ignored.”

“Explanation jihad means introducing the achievements of the revolution and the justice philosophy of the system and thwarting the conspiracies of the enemies by responding to the doubts,” Ayatollah Ramazani stated.

“The achievements of the Islamic Revolution of Iran are many in various fields, but the media dictatorship has not allowed these achievements to be properly explained,” continued the Secretary-General of the AhlulBayt (a.s.) World Assembly.

“The media empire seeks to present the Shah era better than today,” he clarified, “Today, we have made great progress in the field of education, research, science, etc. For example, the presence of women in different areas has developed and cannot be compared with the Shah’s era.”

“One of the important tasks of media and cyberspace is to document the achievements of the Islamic Revolution,” Ayatollah Ramazani added, “The Republic aspect of the Islamic system must be properly introduced, and an example is holding an election every year on average.”

“On the other hand, in America, which claims to be a democracy, we see that after the presidential election, fraud and riots take place under the direct leadership of the then president,” he emphasized.

Pointing out that doubts such as the inefficiency and illegitimacy of the Islamic system should be answered, especially in the media, the Secretary-General of the AhlulBayt (a.s.) World Assembly said, “The task of the revolutionary media is to respond to suspicions against the Islamic Republic.”

In immoral media, immorality and vulgarity are promoted

“The media must respond properly to the conspiracies that have been hatched in these 43 years to overthrow the Islamic system,” he clarified, “Conspiracies of enemies, monarchists, infiltrators, etc. must be thwarted in the media.”

“Today, many acknowledge that the Supreme Leader has followed the path of the late Imam Khomeini (r.a.),” Ayatollah Ramazani said, “The Islamic centers and the geography of resistance have expanded in the world today.”

“Today, in Yemen, Bahrain, Argentina and other American and Islamic countries, there is a call for justice,” he stated.

“The dimensions of the personality and path of General Qassem Soleimani must be explained by the revolutionary media,” the Secretary-General of the AhlulBayt (a.s.) World Assembly stated, “General Soleimani was the commander of peace, but the enemy seeks terror and promotes violence.”

“Media literacy means the skill of using media for specific purposes,” he added, “Media ethics is a set of rules that can be realized based on the call of nature and conscience in professional work.”

“Media ethics is a subset of practical and professional ethics,” Ayatollah Ramazani pointed out, “If media ethics are considered, it can affect the behavior of society.”

“If there is no morality in the media, debauchery will be promoted,” he said, “Many foreign media, like Machiavelli's school, adhere to no moral value.”

“In order to have evil propaganda, the domination system has more than 95% of the media power,” the Secretary-General of the AhlulBayt (a.s.) World Assembly added, “The domination system is always seeking colonization and exploitation and does not allow wealth to be spread in the world, and 90% of the world’s wealth is at the disposal of 10% of world people.”

“Many believe that considering ethics is not out of reach by the media. Therefore, the media must build trust and adhere to the value principles, which is professional ethics,” he stressed, referring to the rising suicide rate in the United States and Europe.

“In the field of media, a global code must be developed,” Ayatollah Ramazani clarified, “The domination and tyranny of the Western media does not allow this issue to be pursued in cyberspace.”

Islam can form the moral code of the media

“To regulate the media ethics system in the world, we must have ethical standards, and Islam can form this moral code,” he mentioned.

“In media ethics, the use of clear words is very important. But unfortunately, vague words have entered all areas,” the Secretary-General of the AhlulBayt (a.s.) World Assembly stated, “If the media does not follow ethics, there will be media colonization and slavery. One of the tasks of the Islamic system is to deal aggressively and hybrid with the media that seek media slavery.”

“In the West, the term ‘free media’ is used to insult the sacred,” he stated, “To prevent vulgarity, there must be moral rules in the media to prevent the media from becoming a kind of dictatorship.”

“In Islam, media ethics is based on honesty,” Ayatollah Ramazani said, “If the media becomes moral, it can also play a role in moralizing the international community.”

“If the media were to tell the facts, the crimes and the use of the arms industry to increase wealth, there would be no reputation for global arrogance,” He emphasized.

“Today, examples of media ethics from the perspective of Islam must be identified. In order to pursue media ethics seriously according to genuine value and human criteria, we must take global ethics seriously and at least adhere to certain minimums,” stated the Secretary-General of the AhlulBayt (a.s.) World Assembly.

“Lack of adherence to ethics in the field of media can make society insecure in various areas,” he mentioned, “Negative propaganda can instill bad energy to society.”