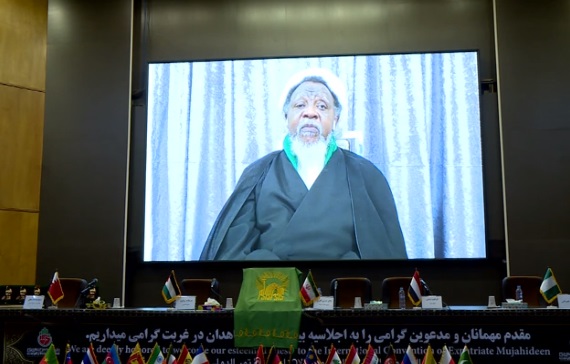 The 6th Summit of “Mujahideen in Exile” was held in Tehran.

“Imam Reza (a.s.) fought against atheists and misconceptions. In his debates with representatives of different religions, he defeated them all. Finally, Mamun Abbasi martyred him. Today, the jihad of Imam Reza (a.s.) is manifested and helps us in the war of thought, belief, and even weapons. They (the enemies of Islam) have occupied many Muslim lands. But today they are retreating,” he added.

“Today we live in an age where both war of ideas and war of arms are taking place. The enemy is trying to change the meaning of Islam and they are attacking it. They tarnish the name of Islam and seek to destroy Islamic values,” stated the official of the Islamic Movement of Nigeria.

“The enemies call the Muslims terrorists. But, Alhamdulillah, the enemy is in a position of retreat today. The resistance of Muslims around the world has shown that neither war against ideology nor field war against Muslims has worked. Therefore, on the anniversary of the martyrdom of Imam Reza (a.s.), we celebrate the victory of the resistance,” he added.

“God willing, Al-Aqsa Mosque will be liberated. I declare my solidarity with the Mujahideen of Palestine, Kashmir, Bahrain, Yemen,” he added, stating that the martyrs are alive.