Right and legal demands are among the characteristics of the Islamic government: Ayatollah Ramazani

Referring to the necessity of enlightening in the society, the Secretary-General of the AhlulBayt (a.s.) World Assembly stated, “Elites of the society, seminarians, academics, professors, lecturers, etc. should not fail in the enlightening field. This Revolution has not been achieved easily; pure blood has been sacrificed for this Revolution, and it will be continued until justice is implemented in true sense of the word.”

ABWA Official Website - At the beginning of his Kharij Fiqh class, while referring to the events of recent months in the country, Ayatollah Reza Ramazani, Secretary-General of the AhlulBayt (a.s.) World Assembly stated, “It is clear to everyone that at first the realization of the Iranian Islamic Revolution was not believable for many. Even some believers in the religious and Islamic system, as well as many seminarians and academics, considered it impossible. Therefore, before the Islamic Revolution, many religious intellectuals believed that for a reformation, transformation and change in the society should be done gradually.”

“The Islamic Revolution was realized under the leadership of Imam Khomeini (r.a.) by observing the religious system and with the support of the people. While many domestic and foreign analysts and theoreticians believed that such a system would not be established, with the special favor of the Almighty God, the leadership of Imam Khomeini (r.a.), the great efforts of the clerics, and the strong presence of the Muslim people of Iran, as well as the blood of sincere martyrs, Iran’s glorious Revolution won,” Ayatollah Ramazani added. 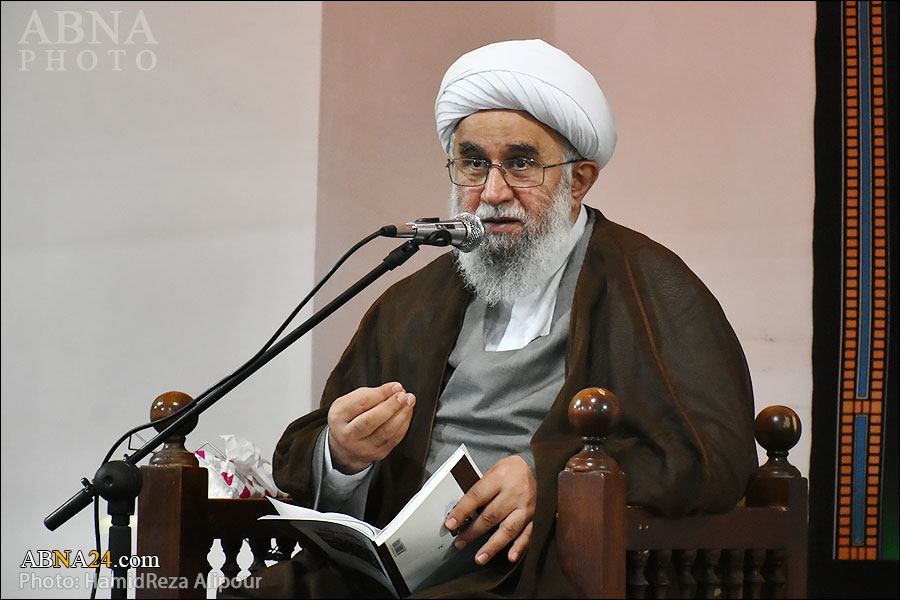 “Of course, from the very beginning this Revolution had opponents both from abroad and inside the country. A group of opponents of the Islamic Revolution were pro-Pahlavis who migrated to various countries such as the United Stated, France, Sweden, the UK, and Germany after the victory of the Revolution, and from there they were engaged in plotting and planning against the interests of Islamic Iran. The other group of opponents were the separatists, who were also active after the Revolution, of which the conflicts in Kurdistan are an example. The other group was the Hypocrites (MKO terrorists) who, especially at the beginning of the Revolution, assassinated influential figures, different strata and guilds of the people in various ways. Also, leftist groups such as Komalah and Democratic Party and People’s Fedai Guerrillas also had claims and made objections. But when they started an armed war, the Islamic system confronted them decisively,” noted the representative of Gilan province in the Assembly of Leadership Experts.

“In the past, the Europeans opposed the presence of the Israeli regime and the establishment of their government in Europe, and finally decided to go to Palestine and establish their regime there. They gradually occupied three quarters of Palestine in various ways, including killing women and children, building a wall between the occupied territories and the Palestinian indigenous people, and many other things. Today, unfortunately, the normalization of relations between Arab countries and the Zionist regime is discussed, and some Arab leaders did this and established their embassies inside the occupied territories,” Ayatollah Ramazani said.

“Currently, the occupation regime of Israel is one of the sides of the sinister triangle of colonialism. If a decision is to be made about a region of the world, one side of this decision making is Israel, which has reached such a situation with the support of the United States. The other two sides are Saudi Arabia and the United States. They use the wealth of the Muslim nation of Saudi Arabia and the public wealth of the Muslims to colonize the people,” continued the seminary professor.

According to the literature that the late Imam Khomeini (r.a.) has taught us, ethnic and tribal wars among the Muslim nation of Iran are meaningless. Kurds, Turks, Lors, Baloch and Arabs, Persians and Gilaks, etc. are all brothers and it does not make sense for them to want to confront and fight with each other. Because Imam Khomeini (r.a.) considered religious differences as one of the enemy’s plans. Because what is the real criterion for the superiority of a group over another is only divine piety. These are the lessons that our honorable Imam taught us based on Islamic literature and culture, which is derived from the teachings of the Prophet (p.b.u.h) and the Holy Quran,” said the representative of the people of Gilan in the Assembly of Leadership Experts.

“Both intellectually and executively, the position of women after the Revolution is very different from before the Revolution,” he emphasized.

Referring to the efforts made to achieve a value and justice system in the literal sense of the word in the society, Ayatollah Ramazani stated, “Against the embezzlements and betrayals, different strata, society’s justice seekers and revolutionaries are protesting and demanding answers. The government should have a plan regarding the demands of trade unions.”

“Laws and regulations should be established regarding the demands of guilds and different strata of the country’s people. This should be followed up. Right and legal demands are among the characteristics of the Islamic government. A plan and platform should be provided and defined so that people and protestors can express their demands in legal gatherings and demonstration. The legislature and the executive should pay attention to this issue,” emphasized the representative of the people of Gilan in the Assembly of Leadership Experts according to the official website of the AhlulBayt (a.s.) World Assembly.

Referring to the recent events in the country and the attempts of colonial countries to regime-change in Iran, Ayatollah Ramazani said, “In recent events, all the colonial countries came to attack Iran, and they were not satisfied with anything other than overthrowing the government. Previously, many countries did not announce this issue officially, although their approach was in line with the regime change. But in this period, the leaders of some countries raise the issue of regime change, which is considered a clear intervention in the countries’ issues. These people should never be allowed to interfere in Iran’s political system. The Islamic Revolution was established to prevent interventions, domination, arrogance and colonialism.”

Expressing his regret for the deaths of people and the damages caused in the recent incidents, the Secretary-General of the AhlulBayt (a.s.) World Assembly said, “The fact that some people under the pretext of protesting some issues, want to block streets and highways, set fire to banks and ambulances, carry out brutal attacks, and kill our security forces and youths, is not understandable and acceptable. These cases cannot be defended by any law anywhere in the world.”

“In recent months, some groups have brought weapons and ammunition into the country to harm the Islamic society of Iran, and unfortunately, in these events, several people from the defense and security forces were martyred in the front line. Certainly, these hostile and disruptive people should be separated from the protesters. Because they are not looking for civil demands, but for a regime change, and they do not spare any brutality in this way,” Ayatollah Ramazani added.

“Some people were got carried away and deceived thinking that the actions of those who are looking for a regime change, are a protest, and according to the Supreme Leader of the Revolution, the Islamic government will deal with them with Islamic compassion”. But the actions of those who threatened, were lured by the words of others, sought the change regime, and killed people, cannot be tolerated in any way and will be dealt with according to the law,” he added.

Referring to the fake news of the BBC, Manoto, Iran International, etc., Ayatollah Ramazani said, “Even some critics of the Islamic government have realized that the news of these networks is fake. These media outlets highlight the small gatherings inside or outside the country against the Islamic Republic system with media magnification. But they underestimate the huge marches and millions of participants of the great nation of Iran, and they often do not publish the news of such gatherings it at all. There is no doubt that the Islamic Revolution suffered material and spiritual damage with these conspiracies. But everyone should know that the Islamic Republic of Iran will not shake with these winds.”

In another part of his speech, while emphasizing the need for enlightening in the society, the Secretary-General of the AhlulBayt (a.s.) World Assembly stated, “Elites of the society, seminarians, academics, professors, lecturers, etc. should not fail in the enlightening field. This Revolution has not been achieved easily; pure blood has been sacrificed for this Revolution, and it will be continued until justice is implemented in true sense of the word. Today, the Jihad of Enlightenment is a religious, legal, divine and revolutionary duty and responsibility for all of us.”

“There is no doubt that there are problems in some parts of the society that all ethnic groups should mobilize and solve them. Baluch, Lur, Gilak, Turk, Arab, Fars, Kurd, Sunni and Shiite, we are all brothers. We are all in one family of Islamic Iran and we must protect this flag,” said the representative of the people of Gilan province in the Assembly of Leadership Experts.

“In this time and difficult conditions, which are becoming more difficult day by day, our duty is to continue the enlightening jihad. This is the most important thing that seminarians and academics should do, and it should be continued in schools, universities, mosques, and cultural centers,” concluded the Secretary-General of the AhlulBayt (a.s.) World Assembly. /345/