Considering the support of orphans as a prominent feature of Imam Ali’s life, the Secretary-General of the AhlulBayt (a.s.) World Assembly said, “Today, supporting orphans can help alleviate the problem of emotional poverty in society.” 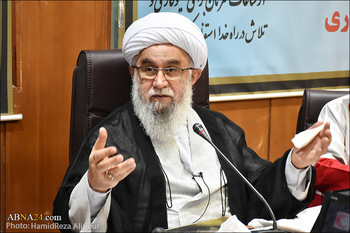 In the tenth episode of the special internet program “Facing the Sky”, which is broadcast on the occasion of the holy month of Ramadan, pointing out that Ramadan is the month of God’s feast, referring to the necessity of implementing the divine commandments, Ayatollah Reza Ramazani Gilani stated, “Islam does not have only individual rules, but a major part of Islamic rules is social.”

“In many verses and hadiths, it is highly recommended to pay attention to the poor, the needy, and to support orphans and protect their property,” added the Secretary-General of the AhlulBayt (a.s.) World Assembly, pointing out that it is necessary to pay attention to the challenges, social problems, and helplessness that sometimes arise in society.

“In various prayers, we ask God Almighty to provide us with sustenance to be kind to orphans,” said Ayatollah Ramazani, considering the support of orphans as one of the prominent features of the life of Imam Ali (a.s.).

“According to some narrations, if someone can take care of an orphan and make him needless, God makes Paradise obligatory on him, and for the one who uses the property of the orphan, the fire of Hell becomes obligatory,” said the Secretary-General of the AhlulBayt (a.s.) World Assembly, referring to the effects and results of caring for orphans.

“According to the Prophet Muhammad (p.b.u.h), supporting orphans eliminates cruelty of heart,” he noted, referring to the advice of the Holy Prophet (p.b.u.h) regarding the supporting of orphans.

“There is no believing man or woman who puts his hand on the head of an orphan unless God writes goodness on the number of hairs that are touched,” added Ayatollah Ramazani, stating that God Almighty pays special attention to orphans.

“The best homes are those where orphans are cared for,” noted the Secretary-General of the AhlulBayt (a.s.) World Assembly, pointing out that supporting orphans causes enlightenment in human beings.

Referring to the existence of various institutions for the care of orphans, he stressed, “However, the role that the family can play in raising orphans and supporting them is very different and influential.”

“Of course, donors can, as far as possible, participate in the reward of this God-pleasing deed by visiting orphanages, embracing orphans, and paying their expenses,” Ayatollah Ramazani stated.

“Today, supporting orphans can help alleviate the problem of emotional poverty in society,” emphasized the Secretary-General of the AhlulBayt (a.s.) World Assembly, referring to the social effects of supporting orphans in the society.

Stating that orphans need consolation, inspection, and care, he noted, “Imam Ali (a.s.) was a role model in this action and always paid attention to the orphans.”

“Fortunately, today we see that many orphans in society have reached top scientific, cultural and social positions,” concluded Ayatollah Ramazani in the end.