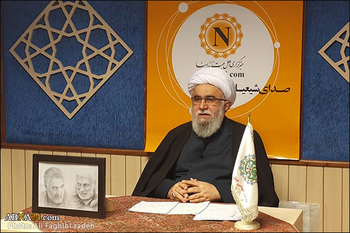 As the presidential election and the elections for Islamic councils of cities and villages approach, a virtual enlightening meeting for the University of Applied Science and Technology of district two (Gilan, Mazandaran, and Golestan provinces), entitled “Conscious Participation”, was held on Tuesday, June 15, 2021.

In this webinar, referring to the necessity of holding the enlightening meetings as the presidential election approach, Ayatollah Reza Ramazani stated, “It is essential to inform the people about the importance of maximum turnout in elections.”

Congratulating the Dahe-e Keramat (Ten days of Benevolence), the anniversary of the birth of Imam Masoumeh (a.s.) and Imam Reza (a.s.), the Secretary-General of the AhlulBayt (a.s.) World Assembly stated, “Benevolence and dignity are important issues that are also related to the issue of elections and the people.”

“‘Akram’ (most benevolent and dignified) is one of the names of God, and the Prophet (p.b.u.h) has been sent to human society as “Karim” (who has benevolence dignity),” he added, stating that the preservation of human dignity is the concern of God Almighty.

“The most important task is to maintain the dignity and status of the people, which must be taken into account,” noted Ayatollah Ramazani, pointing out that the Quran is the textbook of dignity and the divine angels have been introduced as dignified ambassadors.

“The Islamic Revolution has changed the region equations in the international arena and created a kind of authority in the field of social and political Islam,” stated the representative of the people of Gilan in the Assembly of Experts, “Our Islamic Revolution (of Iran) has been a fundamental change in the present century.”

“Today, the leadership of this Islamic system has been entrusted to the Supreme Leader of the Revolution (Ayatollah Khamenei) and he continues the same school of Imam Khomeini,” he added, “The holy system of the Islamic Republic is a miracle founded by Imam Khomeini.”

Referring to the pillar of Islam, the Secretary-General of the AhlulBayt (a.s.) World Assembly stated, “It is the pillar, the legitimacy and the content of the system, and we must look deeply at it.”

Referring to the leadership of the Islamic system, he noted, “Today, the Islamic Revolution, with the pillar of powerful leadership, has been able to be present in the world with rationality, spirituality, justice, and resistance and show its authority.”

“The presence of the people in the Islamic society and political system of Iran was considered as a pillar not only today but also in the past in religious teachings and beliefs,” said Ayatollah Ramazani, referring to the third pillar, that is the people.

“That the best and most efficient people should be appointed to positions, and that people should have an active presence in their destiny, are two important lessons from Ghadir,” stated the representative of the people of Gilan in the Assembly of Experts, pointing out that Imam Khomeini stated that the reason for the “Ghadir” was to participate people in their destiny.

“If human society wants to achieve sovereignty based on justice, people’s presence in it must be powerful,” Ayatollah Ramezani added, “The greater the presence of the people, the greater the authority of the system.”

“According to the Supreme Leader, we all need to know that defense capabilities, and the power of diplomacy, give power to the country, and more than that, it is the nation and the people of a country that give it power,” said the Secretary-General of the AhlulBayt (a.s.) World Assembly.

“Everyone should try to achieve maximum turnout in the upcoming elections because this participation strengthens the system’s acceptance and increases its power in the international arena,” said the Secretary-General of the AhlulBayt (a.s.) World Assembly, referring to the Supreme Leader’s political jurisprudence view.

“One of the main tactics of the enemies is to create discord between the people and the officials and to create despair and hopelessness in the society,” he said, “The maximum turnout in the elections shows the enemies that they cannot infiltrate the system.”

“The weakening of the Islamic system will create an opportunity for the enemy to strike it,” said Ayatollah Ramezani, pointing out that the enemy’s multimedia has made every effort to create despair and hopelessness in society.

“During the forty-two years since the victory of the Islamic Revolution, great and fundamental works have been done in the scientific and military sectors, to the extent that the Islamic country (Iran) has become an important power in the region and internationally, and puts world powers at the negotiating table with it,” stated the representative of the people of Gilan in the Assembly of Leadership Experts.

“In the second phase of the revolution, the issues of science, ethics, spirituality, the realization of justice, the fight against corruption and the Islamic lifestyle, as software for the realization of Islamic civilization must be seriously considered,” he emphasized, pointing out that the integration of the three pillars of Islam, the leadership and the people, has caused the Islamic system to pass the first forty years and enter the second phase of the revolution. To boycott election due to disqualification some candidates, not belief of believer, sympathizer of Islamic system

“Unfortunately, some people say that they only want to boycott the election, and say that they will not vote because of the disqualification of some candidates, and recommend others not to participate in the election,” Ayatollah Ramazani said, “Such words are not the belief of the believer and sympathizer of the Islamic system (of Iran). It is important that every Iranian, as an effective citizen, exercises his social right and participates in the elections.”

“The three pillars of the system should have tried to put less economic pressure on the people, but today we faced unemployment, discrimination, and so on,” he stated, noting that Iran has been facing economic pressures and sanctions, and sometimes shortcomings and mismanagement in various sectors.

“The enemy wants to take advantage of this opportunity to show that participation in the elections has no effect,” added Ayatollah Ramazani, “In the field of justice, we did not achieve the desired results and objectives that we had drawn. Therefore, people are somewhat disappointed.”

“Today, we must try to acquaint the people with the ideals of the (Islamic) system and security that have been achieved in the region through the struggles of the martyrs and General Soleimani,” pointed out the representative of the people of Gilan in the Assembly of Leadership Experts.

“One example of this bravery was the recent popular resistance in Gaza and the resistance of the Palestinians, which led to Netanyahu losing the election,” he said, “The bravery of the fighters in the holy defense (Iraq-Iran imposed war) and the protection of the country’s geographical sovereignty is a great honor.”

“One should not blame the whole system for the negligence of some officials,” Ayatollah Ramazani clarified, “The enemies are trying to formulate their future policies according to the level of people's participation in the elections.”

“The candidates spoke freely in their debates, and complete freedom of expression was observed in these views, which was not the case before the Islamic Revolution,” stated the Secretary-General of the AhlulBayt (a.s.) World Assembly, referring to the fact that seven candidates were chosen for the presidential election according to the law and by the Guardian Council.

“In these three debates, sometimes some candidates, in addition to performance criticism, also insulted other candidates, which we criticized about,” he mentioned.

“If the candidates had only scrutinized the programs in depth, some insults would not have taken place,” stated Ayatollah Ramazani, emphasized that the candidates should manifest the elections’ ethics.

We must elect a president who feels responsible for all citizens

“In the presidential election, we should look for people who have passed management courses while having the ability,” the representative of the people of Gilan in the Assembly of Experts stated, “A person must be elected who is the president of all people and feels responsible for all citizens.”

“People should feel that a powerful president with a strong team and a young spirit has come, and can make a difference in the political, social, economic, and cultural spheres,” he said, emphasizing the need to give hope to society at this critical juncture.

“Iran, with its vast underground resources, agricultural lands, industrial sector, military, etc., can excel in every way and show its power,” stated Ayatollah Ramazani, “In its second phase, the Islamic system of the revolution needs change in all areas and sectors.”

“Unfortunately, today we are witnessing the closure of some factories, the problem of unemployment and high inflation,” stated the Secretary-General of the AhlulBayt (a.s.) World Assembly “However, the feeling of hopelessness should not be conveyed to society.”

“We call on all brothers and sisters who believe in the Islamic system to go to the polls on Friday and once again disappoint the enemy,” he added, “With rationality in decision-making, jihadi and revolutionary action, and in order to achieve the spiritual growth and development of the society, the justice seekers of the society must also participate in the elections.”

“The enemies of the revolution should know that even if some people do not participate in this election, it does not mean that they do not accept the system, but they are heartbroken and pressured because of some officials’ negligence,” stated Ayatollah Ramazani.

“We call on all those who are somehow heartbroken and dissatisfied, to participate in the elections to entrust the responsibility on someone who has the power and authority to effectively form a powerful government,” stated the Secretary-General of the AhlulBayt (a.s.) World Assembly.

“People who believe in the Islamic system must also be vigilant. Because the foreign media is trying to prevent anyone from participating in the election,” he mentioned.

“The president-elect must address social harms such as poverty, prostitution, class distance, divorce, addiction, immigration, rent, embezzlement, and some corruption,” added Ayatollah Ramazani, “The president must try to solve the problems with four-year planning and jihadi management.”

“In the way of the Islamic system, the Iranian people sacrificed their lives and property. Some mothers have sacrificed five or six martyrs, and are proud to have sacrificed for a government that has the light of the AhlulBayt (a.s.) school,” said the representative of the people of Gilan in the Assembly of Experts, stating that everyone should try to preserve the dignity of the people.