Introduction to the publications of the International Conference of Hazrat Abu Taleb (a.s): 1. Description of Lamie Poem by Sardar Kaboli

Description of Lamia Poem of Abu Talib (a.s.) by Sardar Kaboli is one of the works which is revived, corrected, cataloged, and published for the international conference of "Abu Talib (a.s.), the Supporter of the Great Prophet (p.b.u.h)". 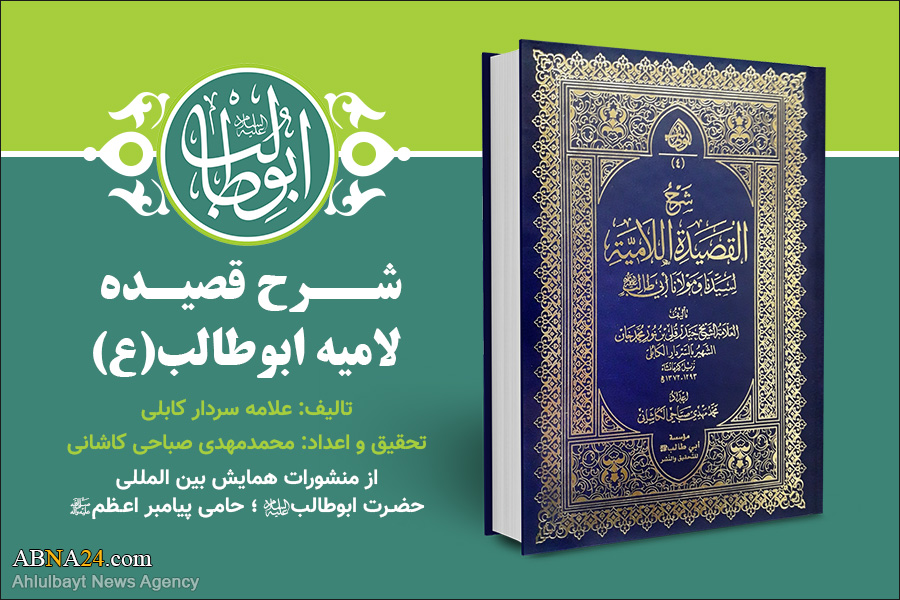 After three years of academic, literary, promotional and cultural activities, the "International Conference of Hazrat Abu Talib (a.s.); Supporter of the Great Prophet (p.b.u.h)" will be held in March 2021 by the AhlulBayt (a.s.) World Assembly with the cooperation of similar institutions.

Among the academic activities of the conference have been "revival, research, correction and translation of magnificent academic works about the literary heritage of Abu Talib (a.s.)" and also "publication of a series of treatises on the position of Abu Talib (a.s.) from the perspective of the Holy Prophet (p.b.u.h) from Shiite and Sunni sources".

Due to the approaching days of the conference, these works will be introduced:

* Publisher: Abu Talib (a.s.) Institution for Investigation and Publishing; On the occasion of the "International Conference of Abu Talib (a.s.), Supporter of the Great Prophet (p.b.u.h)"

- Descriptions and translations of Lame poem

- Description of the Lamie Poem

Index of Tribes and clans

Index of Dates and Occasions

Table of verse numbers in other descriptions of Lamie poem

Hazrat Abu Talib (a.s.) was one of great Arab poets before and in early days of Islam. From 3000 verses which according to “Ibn Shahr Ashub” (1096- 1192) he wrote which notify his faith, approximately 1000 verses remained and more than 90 percent of this amount, relate to Prophet Muhammad (p.b.u.h) and Islamic events, including invitation of his tribe to Islam, and inviting the king of Abyssinia (Ethiopia) to Islam or deploring the enemies and saboteurs in the way of promoting the religion of Islam.

“Ode of Lamie” is his the greatest and most powerful poem which was in praise of the Holy Prophet (p.b.u.h) and was narrated by Shiite and Sunni scholars. This poem is one of the masterpieces of literature and as Ibn Kathir (1301- 1373) said, “Lamie ode is so eloquent and charming that no one other than is poet can write it”.

Hazrat Aboutaleb Research and Publishing Cultural Institute which is one of the cooperators of the International Conference “Hazrat Abu Talib (a.s.), the Supporter of the Great Prophet (p.b.u.h)” has revived, corrected and published this book. Adding a detailed biography of the commentator of this book and several indexes at the end of it, are of the numerous works done for the version prepared for the conference, by the director of this institute, Hojat al-Islam “Sabahi Kashani” with the cooperation of some seminary professors at the Islamic Seminary of Qom.