According to Ahlul bayt News Agency – ABNA – following the bloody attack of the Nigerian army and security forces at Arbaeen mourning ceremony of Imam Hossain (A) and killing of tens of Shiites, Ahlul Bayt World Assembly has issued a statement condemning this heinous action and has demanded Islamic organizations to condemn such inhuman actions.

The full text of the statement is as follows:

In the silence of the Human Rights organizations and claimant countries, once again the world witnesses the tyranny of the Nigerian army and security forces against followers of Ahlul Bayt (A).

These shameless criminals, have spilled the blood of mourners of Imam Hussain (A) in Arbaeen procession and have martyred many men, women, and children and have injured hundreds.

According to Islamic Movement of Nigeria and eye-witnesses, police and security forces have attacked the mourners savagely, violently, and cold-heartedly by firearms.

The Nigerian army and security forces have doubled and increased their violence towards followers of Imam Hussain (A) over the past years by Saudi and Wahabi's encouragement. Even the Wahabi Imams and Takfiri movements have openly encouraged division, sectarianism and killing of the Shiites in their speeches and ceremonies.

The suppression wave of the Shiites began last year when the security forces attacked a Hosseinieh in Zaria. Also they attacked Sheikh Zakzaky's house and severely injured and detained him. That year about 1000 Shiites were killed and wounded of whom 350 were buried in mass graves.

Ahlul Bayt World Assembly not also condemns this cruel savagery, but also demands all scholars and Islamic organizations to condemn such inhuman activities and put the perpetrators of these crimes into trial. It demands human rights organizations to condemn these crimes and take practical steps in prosecuting those behind such atrocities. Also it demands the Nigerian government to release the innocent prisoners of conscience including Sheikh Ibrahim Zakzaky and stop such crime against humanity in future.

God Almighty has spoken the truth.

In a meeting held in Iraq, Ahlul Bayt World Assembly's plans for Arbaeen in Iraq started.

In a meeting, in presence of Ahlul Bayt Assembly of Iraq's officials and Ahlul Bayt World Assembly's delegation, setting up of the Assembly's stations on different points on Arbaeen was arranged.

Prior to this, cultural content such as books, booklets, CDs etc. were prepared in Iran and currently are being copied to be given to Imam Hussain (A).

It is noteworthy that Ahlul Bayt World Assembly has covered the great march of Arbaeen with its cultural and intellectual support for years now. These cultural contents are prepared in many different languages annually.

The Ahlul Bayt World Assembly has issued a statement reacting to the traumatic and terrorist incidents that happened during the past days across the world.

The complete statement is as follows:

In the name of Allah, the compassionate the merciful.

“They want to extinguish the light of Allah with their mouths, but Allah will perfect His light, although the disbelievers dislike it.”

It seems that Ashura is yet mixed with blood and martyrdom; and despite the passage of 1400 years since that tragic day, Ashura continues to be repeated and lovers of truth and justice are killed at the hands of Yazidis of this age.

This year, bloodthirsty bats again could not bear the manifestation of Allah's light and attacked on mourners in Afghanistan, Nigeria, Iraq and Syria and killed many of them.

The Ahlul Bayt World Assembly as an international and non-governmental organization with hundreds of elites throughout the world as members, condemns these crimes and draws world's attention to the following points:

2.We sympathize with the people and government of Afghanistan, especially the survivors of the martyrs of the two terrorist attack, ask the government of this brother country to prevent, with extensive measures, extremist groups from bringing Afghanistan into the same fate that Takfiri terrorists have brought to the other countries.

3. Tragic incidents in Nigeria that continue for several years have also reached intolerable levels. In the latest action, attacking the Shiite mosque in the "Fontoy" city in the state of Kaduna, security forces were shot dead and a number of Hussaini mourners were wounded.

4. In regards to this crime, we cannot ask Nigerian government for anything; since the violent and illegal acts of the past few years were done directly by the military forces of this country and the government not only does not take the necessary actions, but also dependents of Wahhabi circles have caused Nigerian police forces to support or to be indifferent to these crimes.

5.We ask the international communities and human rights organizations to put pressure on the Nigerian government and army to stop organized crimes against the country's Shiites and to arrest the perpetrators as soon as possible and bring them to the justice; Also to release "Sheikh Ibrahim Zakzaky," who is in captivity with his wife for about a year.

7. At the end, we reaffirm responsibility of all regional and international players for real and serious encounter with dangerous phenomenon of terrorism. We also recommend leaders of misguided sects and armed extremists to stop division and disagreement among Muslims and to put an end to fratricide, creating corruption, destruction of holy places, preventing from Allah's pass and attacking the Hussaini ceremonies, because Hussain ibn Ali (as) is manifestation of God’s light and God's light cannot be put out.

'Truth as it is' published in Bulgarian

the book "truth as it is" was published in Bulgarian, in Sofia by Ahlul Bayt World Assembly with cooperation of the Islamic Republic of Iran's cultural attaché.

The book was written in Arabic by "Ayatollah Jafar al-Hadi", a member of the Ahlul Bayt World Assembly's Book Council and has explained the principles of Shia Islam very concisely and eloquently.

The book has tried to introduce and describe Ahlul Bayt (A) and their lifestyle "as they were" not as enemies of Shia Islam describe, relying on Hadiths and historical documents. It is an invaluable source for those who are interested in Shia Islam.

The 68-page book has been translated into Bulgarian by "Ms. Maya Tesnova". Its Bulgarian title is: "Йсмцнама макава каквамо е".

It is noteworthy to say that Ahlul Bayt World Assembly and its related communities have published over 1800 books in 56 languages all over the world. 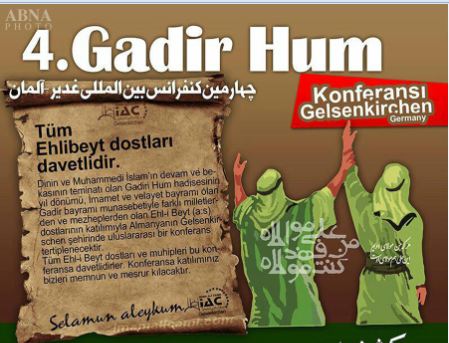 The fourth "Ghadir Conference" to be held in Germany

The fourth international "Ghadir Conference" will be held in Gelsenkirchen by Islamic center of Imam Ali (AS) incollaboration with the Ahlul Bayt World Assembly.

The conference will be held on Sunday (September 25, 2016) in Gelsenkirchen, Germany.

Hujjat al-Islam Ramezani, the head of Islamic Center of Hamburg, and Hujjat al-Islam Sabah-al-Din Turk Yilmaz, director and Imam of Imam Reza mosque will deliver speeches at this conference.

Islamic Center of Imam Ali (AS), which is managed by "Hujjat al-Islam Mehdi Mojahedi", is located in Gelsenkirchen in the North Rhine-Westphalia state of Germany. 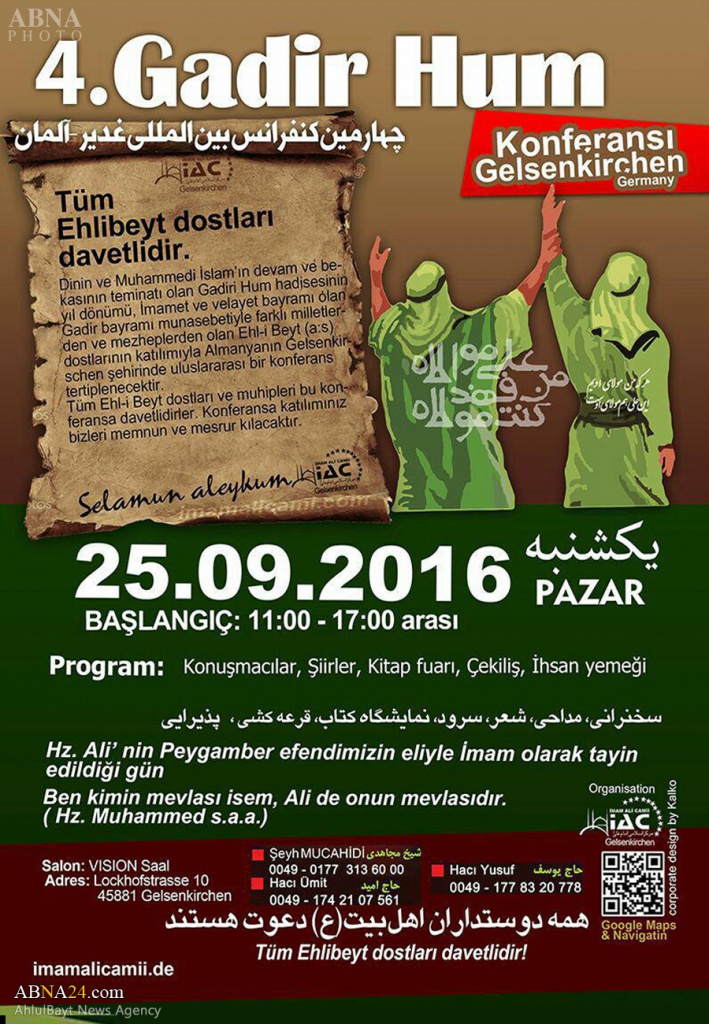 Ayatollah Araki, Secretary-General of The World Forum for Proximity of Islamic Schools of Thought, in the gathering of the Bahraini seminary students condemned the Saudi regime’s attack of Ayatollah Sheikh Isa Qassim and said: “Prophet Muhammad has been sent to establish justice and those who oppose justice are the prophet’s enemies.”

“there are some rules regarding the conflict between justice and oppression which have a limit, in which the oppressors have reached the final level of their tyranny and the defenders of justice are closest to victory. It is a sign of this limit if the offenders drive out the defenders from their homelands and places of living” he added.

Pointing out at political activities of Sheikh Isa Qassim, he said: “this top scholar is advising the Saudi authorities and cries out for justice in Bahrain. The Bahraini people are only looking for their right to vote and involvement in the government. Is this a lot to ask for?”

Stressing on Bahrain’s significance, he stated: “even though Bahrain is a small country, there are prominent scholars and its people have stood against tyranny for centuries now and have stood their ground”

“Bahraini people only call for justice and victory will be theirs in the end. As the martyr Muhammad Baqir al-Sadr put people are stronger than tyranny. Victory will be for those who are patient as patience prepares men for leadership” he added.

Speaking about Sheikh Isa Qassim, he said: “We have observed patience in this prominent figure and Bahraini people’s positions and this patience guarantees the final victory. Bahraini people have been inspired by Imam Hussain (A). The final days of the oppressors are counting”

“when the oppressor’s time comes, God will punish them. When the Israelite left Egypt, God punished the Pharaoh. When a nation of justice leaves the oppressors only tyranny remains and the punishment will fall upon them immediately” he added.

“the oppressors have one thing in common and it is to eliminate justice and those who seek to establish justice. The Saudi regime is seeking to achieve this by the aid of the U.S and Israel. However, as long as the Bahraini people call for justice, the Saudis will not achieve their goals for justice guarantees the final victory of the oppressed” he continued.

In the end of his speech he stated: “Sheikh Isa Qassim deserves reverence. The Bahraini Martyrs are at the peak of faith and virtue who sacrificed their lives for justice”.

Ahlul Bayt World Assembly's secretary of book council has announced the publication of Sheikh Momen Qomi's book "al-Vilayah al-Ilahiyya al-Islamiyah" (divine Islamic leadership) and added: Velayat-e faqih (Guardianship of the Islamic Jurist) and his jurisdiction in Major Occultation of Imam Mahdi is one of the most important subjects in Islamic political jurisprudence. Since the past, sources of emulation and scholars have addressed the issue of Velayat-e faqih and his jurisdiction.

Interviewing with ABNA reporter, Sheikh Abbas Jafari Farahani said: in the contemporary history, Imam Khomeini has addressed the necessity of Islamic Government and Velayat-e faqih as one of the certain principles of Islamic political thought which is rooted in genuine Islamic sources more than anyone else. In his books " Kashf Alasrar", "al Baie", and " al makaseb al muharramah " has addressed the necessity of establishment of Islamic government during Imam's occultation and the scholars and sources of emulation's involvement in social affairs using the four primary sources (Holy Quran, narratives, reason, and consensus).

He remarked: after the Islamic revolution of Iran this subject has been discussed and talked about a great deal in Seminary schools. Among those who elaborately discussed this subject was Sheikh Mohammad Momen Qomi, one of Imam Khomeini's pupils. "Velayah Elahia al-eslamiah" is the fruit of those discussions.

He then added: after the Islamic Awakening in some countries in the region, the necessity to publish a book on Velayat-e faqih and his jurisdiction was mentioned by Ahlul Bayt World Assembly's secretary-general and we decided to prepare and publish this book in one volume for distribution especially in Arab countries.

He then concluded: the present book has 427 pages and has been printed in Lebanon under supervision of the author.

Akhtari: Shiite clergy office must be formed in Russia / Shiite communities must be recognized

Sheikh Akhtari added: In order to recognize the Shiite communities in Russia it is necessary to form a Shiite clergy office.

Affirming Sheikh Akhtari's statements, Sheikh Akbari said: We have begun carrying out this plan and soon we will see the results.

Other agreements in this meeting include: translation of Shiite works into Russian, and holding regional conferences for Assembly's Central Asian and Caucasian members in Moscow.