The Secretary-General of the AhlulBayt (a.s.) World Assembly stated, “Considering the intellectual challenges and Ma’arifa and moral crises, paying attention to authentic and Islamic spirituality is among the most important needs today.”

As one of the speakers on the second day of this conference, while pointing to the suitable international conditions for the propagation of Islam, the Secretary-General of the AhlulBayt (a.s.) World Assembly said, “There has never been an opportunity to promote the AhlulBayt (a.s.) school like today.” 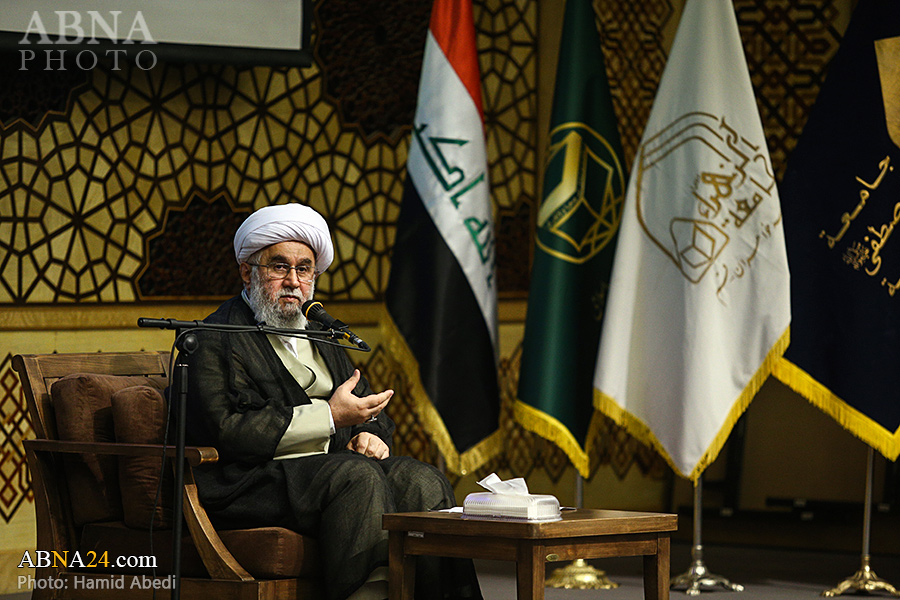 “Considering the intellectual challenges and Ma’arifa and moral crises, paying attention to authentic and Islamic spirituality is among the most important needs today,” added Ayatollah Reza Ramazani.

About the characteristics of Allamah Al-Khersan, the Secretary-General of the AhlulBayt (a.s.) World Assembly said, “Allameh Al-Khersan has scientific comprehensiveness. Holding this conference created an opportunity for me to have a brief study about the scientific and moral life, as well as some of the works of Allameh Al-Khersan. In addition to the scientific and Ma’arifa aspects, and his comprehensiveness in the field of Rijal (the study of the narrators of hadith), Fiqh, history and the revival of scientific and cultural heritage, as well as the books written by Allameh Al-Khersan about Ibn Abbas and Ibn Idris, etc., what stood out for me is his moral and spiritual character, which is of great importance for seminaries. He lives a humble life, is diligent and ascetic, and has a prominent scientific position. During the Arbaeen pilgrimage, I had a chance to meet with Allamah Al-Khersan, which lasted for half an hour, and maybe if I had read dozens of books, it would not have had the effect of meeting him.”

“Allameh Al-Khersan has a gentle and humble spirit that is the beauty of scholars, and this was very influential for me,” he continued.

“The demand of believers from seminaries is to strengthen moral and religious aspects,” Ayatollah Ramazani continued, “In scientific discussions, others also have activities. But the authority for the spirituality, self-cultivation and self-improvement of society is the duty of ulama. This is the basic role that the seminaries should preserve.”

“A religious scholar must be polite to divine manners, and we see this in the character of Allameh Al-Khersan. We see politeness with self, politeness with others, and politeness with God. In a hadith, Imam Sadeq (a.s.) says, “God Almighty raised His Prophet and raised him well, and when He perfected his manners and upbringing, He said, ‘Indeed, you have a noble character.’ Then, He entrusted the work of religion and ummah to him to train and manage His servants. After the Prophet (p.b.u.h) becomes polite to divine manners and attains purity and spirituality, then God entrusts the affairs of religion and ummah to him. The education and training roles are for the spiritual position of the Prophet (p.b.u.h) and this trust has been entrusted to religious ulama as mediators,” he added.

“About the Quranic verse “وَكَذَٰلِكَ جَعَلْنَاكُمْ أُمَّةً وَسَطًا” (Thus We have made you a middle nation) (Quran, 2:43), Allameh Tabatabaei says, ‘In this verse, “وَسَطًا” means mediation. The Prophet (p.b.u.h) plays the role of mediator between the Creator and the people and conveys the divine decrees in various fields for the felicity of humanity. Also, after the Prophet (p.b.u.h), the role of mediation has been entrusted to Imams (a.s.). After Imams (a.s.), religious scholars are responsible for this duty and benefit from knowledge as heritage. People look up to religious scholars, and in addition to educational aspects, scholars play an important role in teaching moral aspects. People learn from the behavior of religious scholars, mustahab (Islamic recommendations), etc. Therefore, after the Prophet (p.b.u.h) and Imams (a.s.), God entrusted religion (Islam) to religious scholars (ulama),” said the professor of high levels of the seminary.

“The West has removed the name and memory of God from the minds,” he added, “Islam is concerned with all spheres of human life. God has entrusted Islam to Islamic scholars (ulama) to teach it. The moral aspect is important, and the ulama can be the imam of the society, and ulama cannot assume this role if they do not speak the truth and do not have spiritual integrity and humility.”

“In the mentioned Quranic verse, martyrs mean “witnesses, examples and models”, and people see religious scholars as examples and models. Today, some are trying to take away this educational and moral status that was entrusted to the ulama after the Imams (a.s.) from the seminaries, and to instill Islam minus the clergy in the human society. This is the greatest danger that threatens the Islamic world. Therefore, we should introduce our great ulama like Allameh Al-Khersan to the society,” Ayatollah Ramazani added.

“The aim of Western curriculum is to marginalize religion. They only use religion when they need to! While from a religious point of view, religion has been revealed for the felicity of people in this world and the hereafter. Religion is for moral educating people, and ulama can be influential in society if they are divine. This is how society grows. Therefore, the ulama can call the society to awakening, enlightenment, refinement and education and become people who give the good tidings or warnings,” he said, about the status of religion in the West.

“Allameh Al-Khersan and other dignitaries should be introduced to the religious society. I hope that God will give success to this conference so that the seminaries of Qom and Najaf can develop wise religiosity in the society,” Ayatollah Ramazani said in the end.

It worth mentioning that the Najaf section of the “1st Conference of the Umana al-Rosol (Trustees of the Messengers): Commemoration of the Grand Ayatollah Sayed Muhammad Mahdi Al-Musawi Al-Khersan” with research meetings was held in the Holy Shrine of Imam Ali (a.s.). The closing ceremony of this section was also held on the Tuesday evening, October 18, 2022, in the conference hall of Lady Fatimah Zahra (a.s.), and the authors of the selected articles and a number of organizers of the conference were appreciated.