The representative of the Supreme Leader in Hajj and Pilgrimage Affairs said, “Hazrat Khadija (a.s.) reached the levels of perfection in the land of ignorance. She had wisdom in that dark era.” 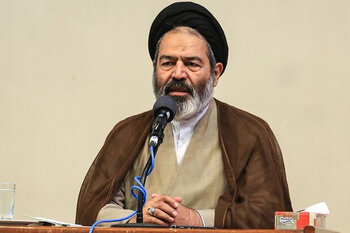 In the conference, referring to the characteristics of Hazrat Khadija (a.s.), Hojat al-Islam Sayed Abdul Fattah Nawab, the representative of the Supreme Leader in Hajj and Pilgrimage Affairs said, “Hazrat Khadija (a.s.) reached the levels of perfection in the land of ignorance. She had wisdom in that dark period and this wisdom led to the acquisition of divine grace.”

“One of the achievements of Islam is “Salam”. In the age of Jahiliyyah (ignorance), when people met, they used words such as “good morning” and “good evening”. The Prophet (p.b.u.h) turned these words into “As-salamu Alaykum”. “Salam” is the greetings of the heavenly beings,” Nawab stated, according to the Hajj website.

“Regarding greetings, the Almighty God instructed the Prophet to say “Salam” to the believers when they come to him, and tell them that God has written mercy on himself to treat you with pity. “When those who have faith in Our signs come to you, say, ‘Peace to you! Your Lord has made mercy incumbent upon Himself.” (Quran, Al-An'am: 54). Ziarat texts (written prayers) usually have three parts that begin with a greeting and continue with expressing the personality traits of the person we went on Ziarat (pilgrimage) for, and the final part is both a prayer and a request. The Prophets manners were such that when he went to visit the dead, he would say “Salam”,” continued the representative of the Supreme Leader in Hajj and Pilgrimage affairs.

The Prophet told Hazrat Khadija (a.s.) that Gabriel had sent him a message to convey God’s “Salam” to Khadija (a.s.). When the Prophet (p.b.u.h) told this to Khadijah (a.s.), she replied, “God is Salam, from Him is Salam, and Salam to Gabriel”,” Nawab continued.

“Her wisdom is partly due to her family. Because she was one of the descendants of Ishmael (a.s.) and the descendants of Abd Manaf, and her family was mentioned in that land with greatness. Like the Prophet (p.b.u.h), Hazrat Khadija (a.s.) did not follow the polytheists and she was persecuted by the idolater polytheists. While this lady had all the characteristics of knowledge, worship, patience, forbearance, raising children and so on,” he said, explaining the issue of how Hazrat Khadija (a.s.) reached this position.

“According to Shiite and Sunni hadiths, Hazrat Khadija (a.s.) had both great wealth and special knowledge and understanding. When she got to know the Prophet (p.b.u.h), she herself proposed to Abdullah’s orphan,” he mentioned saying, “That lady of Islam, presented her box of documents to the Prophet on the first night of the marriage. The Prophet did not neglect Hazrat Khadija (a.s.), and sometimes sacrifice sheep and sent the meat to Khadija’s friends. Sometimes other women complained that God had given the Prophet better than Khadija. But the Prophet replied that no, God has never given him better than Khadija, and said, “She believed in me when everyone was away from me and left all his property at my disposal. He married Abdullah’s orphan and became Umm Al-Momenin, not to marry the Prophet and become Umm Al-Momenin”