The professor of Islamic Azad University said, “It is important that Hazrat Khadija (a.s.) lived with the Prophet (PBUH) for 25 years in love, loyalty, and self-sacrifice.” 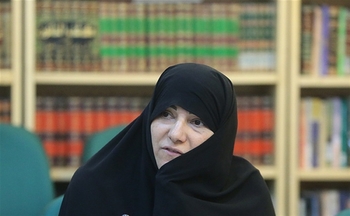 Before Islam, the name of Hazrat Khadija (a.s.) was Tahereh and she was one of the high-ranking and unique women of her time. When one honored of being the wife of the Prophet (p.b.u.h) and the mother of Hazrat Zahra (a.s.), it is clear what a great human she is, and history testifies to this.

“It has been narrated that some of the later women of the Prophet after Khadija, especially Aisha, in order to introduce themselves better and with better characteristics, wanted to mention the Hazrat Khadija as older. But what is important is that she lived with the Prophet (p.b.u.h) for 25 years in love, loyalty, and self-sacrifice,” she added.

Haleh, Hazrat Khadija’s sister, came to Medina many years after her death. The Prophet was very happy and said, “Haleh! May God have mercy on you. You remembered Khadija for me.” Tears welled up in the eyes of the Prophet whenever the name of Hazrat Khadija was mentioned. Aisha was upset about this. She said, “How much do you love this old woman? God has given you better than her” and pointed to himself. The Prophet replied, “God has never given me better than Khadija. When no one believed in me, Khadijah believed, and when everyone turned his backs on me, Khadija supported me and gave all her wealth so that the religion of God would be exalted and I would follow the path that I had as a duty”,” stated Haj Abdul Baqi, referring to the great respect that the Prophet (p.b.u.h) had for Hazrat Khadija.

“According to Christian sources, a prophet is sent after Jesus (a.s.) who is an orphan and a lady from the people of that prophet would support him. The issue was informed to Hazrat Khadija by her cousin, Warqa bin Nofal, before the Be’that of the Prophet,” said the university professor, regarding the characteristics of Hazrat Khadija.