On the 40th day of the terrorist attack on Sayed Al-Shuhada Girls’ High School in Dasht-e Barchi, Kabul, and the martyrdom of tens of innocent fasting student girls, a commemoration ceremony was held by AhlulBayt (a.s.) World Assembly on Thursday, June 17, 2021, at 5:00 PM Kabul and Tehran time. 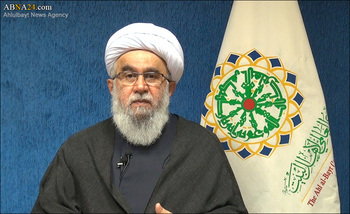 At the ceremony, referring to the painful tragedy of the martyrdom of Shiite schoolgirls in Afghanistan, Ayatollah Reza Ramazani, Secretary-General of the AhlulBayt (a.s.) World Assembly said, “The terrorist explosion at Sayed Al-Shuhada Girls’ High School in Dasht-e Barchi, Kabul, which killed 85 people and injured 150 others, was one of the most tragic terrorist incidents in the contemporary era. Most of the martyrs were 13- to 16-year-old girls. Some of the martyrs of the incident were torn to pieces. So that their identification was possible only by their stationery. On the other hand, the families of these martyrs were below the poverty line.”

“Regarding the crime of martyring female students in Kabul, one should read this verse: “بِأَيِّ ذَنْبٍ قُتِلَتْ” (For what sin she was slain) (Quran, 81: 9). Although condemnation messages were issued from all over the world after this incident, and the seminaries of Qom and Najaf, the Grand Source of Emulations, Sunni scholars, pope, and various organizations condemned it, this incident is one of the most painful and horrible incidents in Afghanistan since the beginning of the American military presence in the country, even in the contemporary era,” he continued.

“For the past 20 years, the United States, before that the former Soviet Union have been present in Afghanistan under the pretext of providing security. However, we have witnessed unrest in this country for the last two decades. Even these unrests still exist today and have not diminished,” added the Secretary-General of the AhlulBayt (a.s.) World Assembly.

“After this terrorist incident, different ethnic groups and parties in Afghanistan expressed their sympathy with the Shiite community of the country. Afghan Shiite clerics also unanimously condemned the Kabul terrorist attack and called on the international community to follow up on the incident internationally. They also called on the Afghan government to try to prevent a recurrence of such incidents, to introduce the criminal face of ISIL among the people, and to strengthen the national spirit in Afghanistan. These points should be followed up,” said Ayatollah Ramazani, Referring to the reaction of different segments of Afghanistan to the terrorist incident in Kabul.

“I must say that, first of all, in the Quranic culture, killing an oppressed person is equal to killing all human beings. God says in the Quran: “مَنْ قَتَلَ نَفْسًا بِغَيْرِ نَفْسٍ أَوْ فَسَادٍ فِي الْأَرْضِ فَكَأَنَّمَا قَتَلَ النَّاسَ جَمِيعًا” (whoever slays a soul, unless it be for manslaughter or for mischief in the land, it is as though he slew all men) (Quran, Sura Al-Ma'idah verse 32). This Quranic view must be taken into account. According to Islam and other Abrahamic religions, man has dignity, man is the center of creation on earth, and God has created all blessings for man. For the evolution and progress of man, God has entrusted a great trust to man, and man has been able to carry this great trust: “حَمَلَهَا الْإِنْسَانُ ۖ إِنَّهُ كَانَ ظَلُومًا جَهُولًا” (but man undertook it. Indeed, he is most unjust and ignorant) (Quran, Sura Al-Ahzaabverse 72). But throughout history we have seen extremist views about the status of man,” he continued.

“In recent times, and the past few decades, we have seen that takfiri thought has had many victims of people in the world, most of whom, of course, have been in Islamic countries, including Afghanistan, Pakistan, and Iran. Also, due to these terrorist acts, we have had many victims in Iran. The martyrs Rajai, Bahonar, the martyrs of Hafte Tir bombing, the nuclear martyrs, and many other martyrs were the martyrs of terror. Unfortunately, some terrorists still believe in killing innocent people. Among the victims of their actions are defenseless women and children,” added the Secretary-General of the AhlulBayt (a.s.) World Assembly.

“In this terrorist incident, which we participated in the 40th day ceremony of it, 85 girls between the ages of 13 and 16 were martyred, and 150 were injured. The terrorist incident in Kabul is a very big crime, and in response to this incident, we have to say to the Western world and international organizations: For what sin were they killed? Unfortunately, the Western world reacted very little to this incident. Sometimes, in response to the smallest thing that happens to a person in the West, all the Western media, through propaganda, deafen the ears of all the people of the world. On the contrary, sometimes big and heartbreaking events take place in the world, during which innocent people are killed, but these media do not show any reaction, and this is a very bitter issue. While these kinds of crimes must be seriously pursued by international institutions, we see some international organizations are just expressing concern! By expressing concern no problem will be solved, and unless these crimes are prosecuted, and the perpetrators are brought to justice, the concern of the international community alone cannot heal the heart wound of families who have lost loved ones,” said Ayatollah Ramazani, referring to the martyrs of the Kabul terrorist incident.

“Despite their poverty, the victims of the Kabul terrorist incident walked with great difficulty every day to get to school and pursue their education. But on the other hand, we face extremist views that forbid education for girls and women. While according to the Quran and hadiths, education is necessary for every human being, and it is obligatory for a Muslim, both men, and women. Extremist views have dealt many blows to human beings, and because of these wrong views, they have taken many people away from us. Unfortunately, this view is attributed to religion. At one time in Iraq, terrorists beheaded innocent people while reciting “Allahu Akbar” and “La ilaha illallah”! Where in the logic of Islam are there such crimes? The first verses revealed to the Prophet (p.b.u.h) were about science, knowledge, and knowledge: “اقْرَأْ وَرَبُّكَ الْأَكْرَمُ* الَّذِي عَلَّمَ بِالْقَلَمِ*عَلَّمَ الْإِنْسَانَ مَا لَمْ يَعْلَمْ*” (Read, and your Lord is the most generous, * who taught by the pen, *taught man what he did not know*) (Quran, Sura Al-Qalam, verses: 3, 4 & 5). Islam invites people to learn knowledge and says that everyone should either be students and seek knowledge, or lovers of knowledge. Islam thus emphasizes the learning of knowledge. On the other hand, Islam complains of ignorance and considers ignorance as to the basis of any evil and danger to human beings. Terrorist movements are born of ignorance,” he continued.

“Throughout history, there has been an extremist view among Muslims. Of course, this view has been among other religions as well. Because of such views, some attribute violence to Islam. While Islam has come for the mercy of human beings. God says in the Quran: “وَمَا أَرْسَلْنَاكَ إِلَّا رَحْمَةً لِلْعَالَمِينَ” (We did not send you but as a mercy to all the nations.) (Quran, Sura Al-Anbiya, verse 107). They attribute violence to Islam. While the Prophet Muhammad (p.b.u.h) said, “I have been sent for mercy.” In recent centuries, due to their inability to analyze the events of the beginning of Islam, some opponents of Islam attributed the violence to Islam, and because of the occurrence of 80 wars during the time of the Prophet, they described him as the warrior. However, if we look at the wars of his time, it turns out that in these wars, the Prophet Muhammad (p.b.u.h) and the Muslims defended, and defense is based on nature and reason. By studying all these wars, this result is obtained. During his 13-year presence in Mecca and at the beginning of his prophetic period, the Prophet (p.b.u.h) witnessed only hardship, suffering, and torture, and Muslims endured these cases too; some of them were exiled, and others migrated to Abyssinia. After emigrating to Medina, from the second year of emigration, the Holy Prophet (p.b.u.h) witnessed the imposed wars. He defended against the attacks of the Mushrekin (Polytheists),” added the Secretary-General of the AhlulBayt (a.s.) World Assembly.

“After the Khawarij, other people followed this extremist thinking in various ways. A century ago, the horrific incident of the demolition of al-Baqi (1806) was an example of the harsh view of ISIL and Takfiris. Owners of this view consider killing obligatory and educate their children with the words murder, violence, and terror. While according to the Islamic view, children should be brought up with kindness, love, and compassion for God and man,” stated Ayatollah Ramazani, referring to the extremist thought of the Khawarij.

“They committed atrocities and crimes against humanity and committed oppression. What sin have 13- and 15-year-old girls committed? They were studying to eliminate ignorance. Eliminating ignorance can lead to the growth of society, and make it a progressive society,” added the Secretary-General of the AhlulBayt (a.s.) World Assembly.

“The dangerous enemy created Wahhabism in order to hide the mercy of Islam. Because if the man becomes acquainted with the merciful thinking of Islam, he will incline to it. Quranic chapters begin with “بِسْمِ اللَّهِ الرَّحْمَنِ الرَّحِيمِ” (In the Name of Allah, the Compassionate, the Merciful), a sentence that refers to the Mercy and Compassion attributes of God. Words of kindness, humanity, and value, such as Rahman and Raouf, have been mentioned many times in the Quran,” clarified Ayatollah Ramazani, pointing out that the dangerous view of ISIL is made by the enemies of Islam.

“In dealing with non-Muslims, we must treat them well, because God says in the Qur'an: “قُولُوا لِلنَّاسِ حُسْنًا” (speak kindly to mankind) (Quran, Sura al-Baqarah, verse: 83). The Prophet (p.b.u.h) said that even if a non-Muslim asks a Muslim for help and he does not respond and does not support him, he is not a Muslim. But we see that an extremist thought destroys a society that must seek science, knowledge, rationality, spirituality, and relationship with God, and emphasize the development of its relationship and be on the path to a peaceful life,” he continued.

“The spirit of resistance of the Afghan people, especially the youth of this country, has always been well-known. They must resist misconceptions, and follow the path of correct knowledge about Islam, a rational Islam that is based on justice and resists dictators by reason and nature. Those who seek to attack and encroach on the honor of a country and its intellectual and geographical borders must be resisted,” added the Secretary-General of the AhlulBayt (a.s.) World Assembly.

“These pure teenagers were killed without any guilt, and killing any of them means killing all of humanity. May God punishes the perpetrators of these violent actions so that these heartbreaking and painful scenes will not happen again in human society,” he mentioned.