To make content produced appealing to audience, we need to know requirements of cyberspace: Ahmadi Tabar

The meeting “Requirements of International Activity in Cyberspace; with the aim of consulting and synergy of professors, veterans, and activists in this field” was held on Saturday morning, August 7, 2021, at the conference hall of the AhlulBayt (a.s.) World Assembly in Qom, with the presence of a group of cyberspace activists in the international arena. 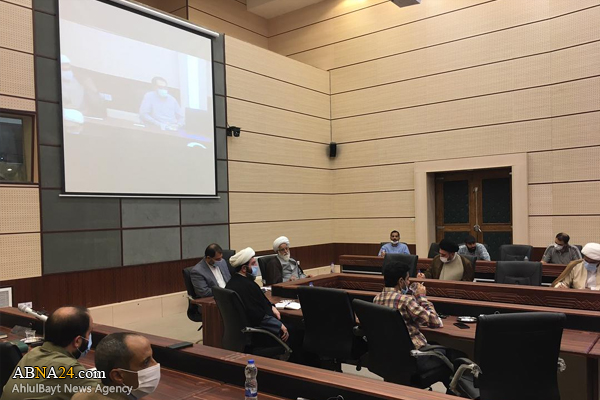 Appreciating the attendance of cyberspace activists in the international arena in this meeting, the deputy for scientific and cultural affairs of the AhlulBayt (a.s.) World Assembly stated, “Cyberspace is one of the requirements that must be addressed alongside real space.”

“In the AhlulBayt (a.s.) World Assembly, some books have been translated into more than 60 languages. But the translation of some books was stopped, and translators were asked to translate books with standard ideas, and those are independent of place and time. Therefore, the products of the assembly are published based on the questions and requirements,” stated Hojat al-Islam Ahmad Ahmadi Tabar, referring to the new policy of the Assembly in line with the activities of cyberspace.

“We held many meetings with experts about the activities of the Assembly in cyberspace. The serious tasks of the General Directorate of Cyberspace are observation, monitoring, and polling, and based on their results, the content will be produced. Content production will also be based on specific requirements and formats. The third task of the General Directorate of Cyberspace is to set up a human and media network,” said the deputy for scientific and cultural affairs of the AhlulBayt (a.s.) World Assembly on the Assembly’s efforts to work in cyberspace.

“In order for the produced content to be attractive and liked by the audience, we must know the requirements of cyberspace,” he added, emphasizing the need for officials and managers to be familiar with the media and to have media literacy.

“If we do not have global activities and thoughts, we cannot have a message for the world,” Ahmadi Tabar stated.

“We seek to train manpower for Shiites at the level of leadership, cultural management, and making institutions and networks. In this regard, we have established the House of Africa, the House of Pakistan, the House of India, and the House of Azerbaijan,” he said, regarding the other activities of the AhlulBayt (a.s.) World Assembly.

At the beginning of the ceremony, while welcoming the participants, Hassan SadraI Aref, the head of the General Department of Cyberspace of the Assembly, gave a brief explanation about the meeting “Requirements of International Activity in Cyberspace; with the aim of consulting and synergy of professors, veterans and activists in this field”. Then, participants expressed their views.

Among the suggestions of cyberspace activists in the international arena who participated in this meeting were: paying attention to the needs of the audience, needs assessment and audience recognition, utilizing the capacities of the Assembly in the world, especially for the organizing, training and empowering preachers and affiliated persons, cooperation with followers of other religions and sects, the need to address the ethical issues in Islam and the introduction of the moral school of the AhlulBayt (a.s.) in cyberspace, the need to localize the content produced and to take into account the tastes of the audience, using the successful experiences of others, cooperation with foreigners residing in Qom, the need for coordination, concentration and cohesion of forces active in cyberspace and creating a connecting link between media managers, policy-making and facilitator of the Assembly and identification of new platforms of activity in cyberspace, connection with artists and members of the media working in the international religious arena, launching a network of cultural-virtual missionaries and emphasizing on holding these meetings and creating specialized working groups.