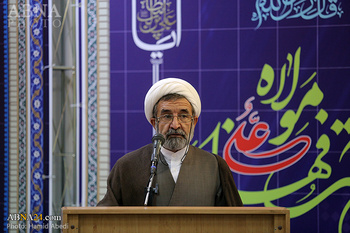 The Ahl-ul-Bayt (AS) World Assembly plans to organize a competition featuring Quranic activities.

Titled 114 World Award, its main aim is identifying and appreciating such activities and creating a network of Quranic initiatives of the followers of Ahl-ul-Byat (AS), the Assembly’s international deputy said.

Sheikh Mohammad Javad Zarean said a plot thatched by the enemies of Islam and Muslim unity is to spread the wrong notion that Shia Muslims do not pay attention to Quranic activities.

He said the first edition of the 114 World Award will be held this year in the holy month of Ramadan.

Ramadan is the month of Quran and an opportunity for reading, reciting and contemplating the Holy Book and promoting Quranic activities, he said.

The cleric noted that the difference the award has with other such competitions is that no one is invited to take part in the contest but the organizers identify Quranic activities and select and introduce the best ones.

Sheikh Zarean invited institutions and organizations active in Quranic fields to help the Assembly in holding the event.

In the first edition of the award, the focus is on arts, media and software production activities, he noted.

The cleric also noted that the Quranic activities in Iran will not be included in the selection process for the time being given the broad scope of such activities in the country.

He expected that more than 1,000 Quranic activities will be evaluated to select the best ones. 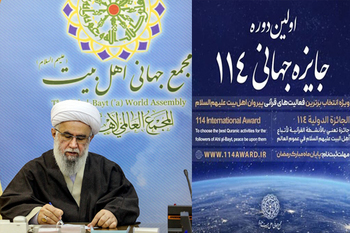 In a message on the occasion of holding the first Quranic international “World Prize 114”, the Secretary-General of the AhlulBayt (a.s.) World Assembly, Ayatollah Reza Ramazani emphasized, “By participating in this Quranic program, dear preachers, esteemed members of the Assembly, and all esteemed colleagues and companions are expected to pave the way for the increasing development of Quranic culture among the followers of AhlulBayt in the world.”

The message of the Secretary-General of the AhlulBayt (a.s.) World Assembly of the is as follows:

During his blessed life, especially in the last days of his honorable life, the Holy Prophet (p.b.u.h) ordered the Muslims of the world to make two great and precious deposits, namely, “the Holy Quran” and “Itrat” (AhlulBayt), and he considered the way of salvation, happiness and excellence of the Islamic Ummah in following the two together at the same time.

Today, in the era of the revival of Islam, whose enemies want to separate Muslims from the Quran and Itrat, and intending to destroy the unity of Muslims, they are doing everything to destroy the global discourse of genuine Islam; The way of salvation and happiness and victory is the same as it was: Clinging on the two precious weights that the Prophet deposited and commanded and bequeathed to the entire Muslim Ummah.

The vicissitude history of the Islamic Ummah is proof that whenever the Muslims, by the order of the Prophet, placed these two weights in front of them and clung to them, they witnessed scientific, cultural, social, and economic conquests and prosperities. Whenever they are neglected or one of those two weights is neglected, Islamic Ummah is not entitled to anything but stagnation, domination, tyranny, poverty, and misery in all aspects.

Following the method of the Infallible Imams (a.s.) as translators of revelation and true interpreters of the word of God, who received the entire Quran from the Holy Prophet (p.b.u.h) and sacrificed their lives to revive and establish the Quran, the World Assembly of the AhlulBayt (a.s.) is proud to establish and strengthen the movement for the development of Quranic culture among followers and lovers of the AhlulBayt, by emphasizing the excellence and maturity of them, in order to revive their Quranic values and acquaint them more with revelatory teachings.

Therefore, the opportunity of the holy month of Ramadan – which is the spring of Quran, according to one of the Imams – should be, in the true sense of the word, the beginning of a process of prosperity to the spread of Quranic culture among the followers of the AhlulBayt (a.s.) throughout the world. Efforts to design and implement various Quranic programs from teaching and research to promoting Quranic culture in attractive formats for different types of audiences, especially youth and adolescents, such as producing artistic products and influential media, setting up home and community Quranic circles, Quran recitation ceremonies and daily recitations, various competitions, Quran-based pulpits and lectures, etc.; the atmosphere of houses, mosques and husseiniyahs, the virtual space and the gatherings of the followers of God will illuminate and perfume them in this luminous month.

The AhlulBayt (a.s.) World Assembly intends to promote this enlightened current, and valuable Quranic movement, which began at the same time with the middle of Shaban, the birth of the fourteenth speaker Quran, the and savior of humanity, Imam Mahdi (a.s.), and will be held on the great feast of Ghadir, by supporting the Quranic activities of Quranic centers, preachers and activists by launching the “World Prize 114”.

By participating in this Quranic program, dear preachers, esteemed members of the Assembly, and all esteemed colleagues and companions are expected to pave the way for the increasing development of Quranic culture among the followers of AhlulBayt in the world, and the result of this blessed effort, would be the pleasure of God Almighty and the blessed Thaqalayn (Quran and AhlulBayt) as the freshness of life in this world and the preservation of the Hereafter for all.

Peace be upon you and God bless you

Secretary-General of the Assembly 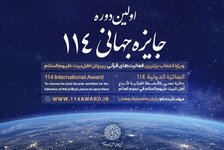 First “World Prize 114” will be held by ABWA

The deputy for International Affairs of the AhlulBayt (a.s.) World Assembly announced the holding of the first “World Prize 114”.

“This award is given to non-Iranian Quranic centers, missionaries and activists who are the follower of the AhlulBayt (a.s.), regardless of gender and age, in all parts of the world,” said Hojat al-Islam “Mohammad Javad Zarean”, announcing this news.

“Considering that the propagation of the teachings of Islam and the culture of the AhlulBayt (a.s.) with the focus on the Holy Quran is one of the most important and necessary activities that as a basis for balanced guidance and education guarantees the inner strength of the society, “World Prize 114” seeks to deepen and facilitate the propagation of the teachings of the Quran and AhlulBayt (a.s.) by creating a healthy spiritual and competitive environment, and while discovering the top talents and missionaries in the field of Quranic activities, provide a space for these pure talents to grow and develop,” he added.

“For more information visit website: https://114award.ir/en/,” said deputy for International Affairs of the AhlulBayt (a.s.) World Assembly, inviting Quranic centers, preachers and activists from all over the world to participate in this festival.