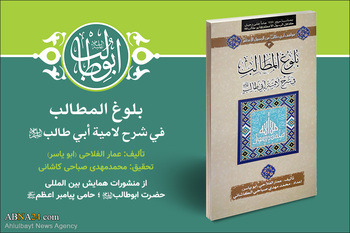 After three years of academic, literary, promotional and cultural activities, the “International Conference of Hazrat Abu Talib (a.s.); Supporter of the Great Prophet (p.b.u.h)” will be held in March 2021 by the AhlulBayt (a.s.) World Assembly with the cooperation of similar institutions.

Among the academic activities of the conference have been “revival, research, correction and translation of magnificent academic works about the literary heritage of Abu Talib (a.s.)” and also “publication of a series of booklets on the position of Abu Talib (a.s.) from the perspective of the Holy Prophet (p.b.u.h) from Shiite and Sunni sources”. Due to the approaching days of the conference, these works will be introduced.

After introducing the Description of Lamie ode by Sardar Kaboli in Part 1, Translation of Lamie Ode of Hazrat Abu Talib (a.s.) in Part 2, and Zahrat al-Adeba Fi Sharh Lamie Sheikh al-Bat’ha in Part 3, now we introduce the 4th work which has been published for the conference.

- Introduction (including: Scholars’ speech on the poetess of Abi Talib and his Lamia ode, the reason for composing Lamia ode, authentication and validity of the ode, the number of verses of Lamia ode, introduction of Lamia’s explanations and translations, the beginning of Lamia ode, Acknowledgments)

At the end of the book, there is also a list of publications of “Hazrat Aboutaleb Research and Publishing Institute”.

Hazrat Abu Talib (a.s.) was one of great Arab poets before and in early days of Islam. From 3000 verses he wrote, that according to Ibn Shahr Ashub (1096- 1192) are the sign of his faith, approximately 1000 verses remained and more than 90 percent of this amount, relate to Prophet Muhammad (p.b.u.h) and Islamic events, including invitation of his tribe to Islam, and appreciating the king of Abyssinia (Ethiopia) who sheltered the Muslims and defended them against Meccan Mushrekin delegation, deploring the enemies and saboteurs in the way of promoting the religion of Islam and etc.

Throughout history, the Lamia ode has been interpreted by Shiite and Sunni figures; but …

“Bolugh al-Matalib fi Sharh Lamie Abi Talib (a.s.)” is a short description book in which below each verse of the poem, a brief description is given. “Hazrat Aboutaleb Research and Publishing Institute”, which is one of collaborative institutes in “International Conference Abu Talib (a.s.), the Supporter of the Great Prophet”, have ordered and published this short description.

Mr. Ammar al-Fallahi (Abu Yaser), one of young Arab clerics of Qom Seminary, is descriptor of these verses. In this version, the Lamia Ode is of 132 verses, and while maintaining brevity, Mr. al-Fallahi has worked hard to explain these verses and has referred to numerous Shiite and Sunni sources, including the Divan of Abu Talib compiled by Dr. Muhammad al-Tunaji.

This book is also the third work in the collection of works of the institute which is published under the title “The position of the Prophet Muhammad (p.b.u.h) in the view of Hazrat Abu Talib (a.s.)”.