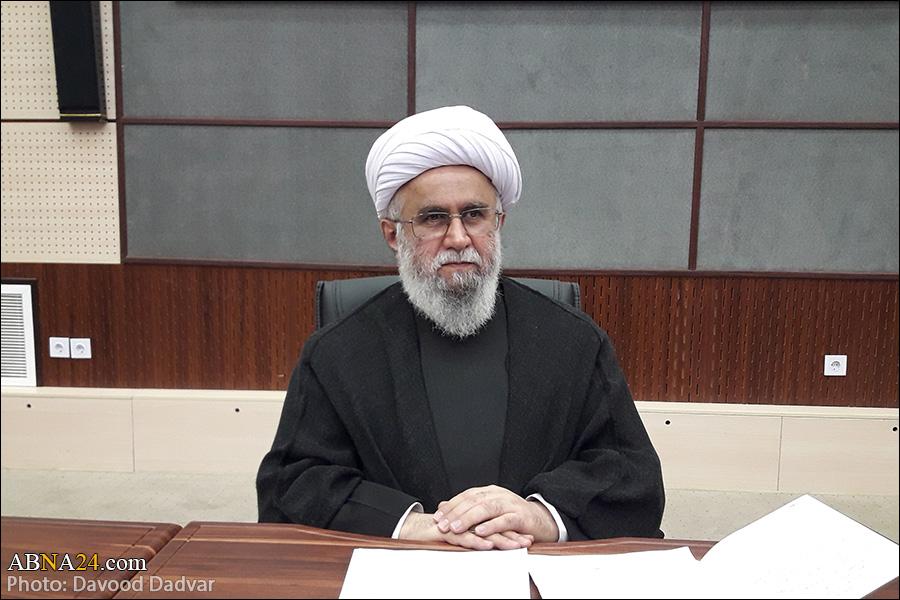 On Thursday, June 23, 2022, the Secretary-General of the AhlulBayt (a.s.) World Assembly met with some of the ulama of Republic of Azerbaijan in the meeting hall of the Qom Assembly.

In this meeting, after welcoming the guests, Ayatollah Reza Ramazani about different spheres of religion said, “Religion addresses the personality of human beings, their beliefs, attributes and actions. Jurisprudence needs a comprehensive view. Because the religion is not minimal, but it has teachings in all spheres of human life.”

“Imams (a.s.) are the “ساسة العباد”, meaning the real improvers of society. Imam Reza (a.s.) says about Imams (a.s.) that they seek to improve the society,” he added.

“The establishment of a scientific council by Azerbaijani scholars living in Qom is significant and this scientific council must maintain its activities. According to the Quranic verse “وَمَا كَانَ الْمُؤْمِنُونَ لِيَنْفِرُوا كَافَّةً فَلَوْلَا نَفَرَ مِنْ كُلِّ فِرْقَةٍ مِنْهُمْ طَائِفَةٌ لِيَتَفَقَّهُوا فِي الدِّينِ وَلِيُنْذِرُوا قَوْمَهُمْ إِذَا رَجَعُوا إِلَيْهِمْ لَعَلَّهُمْ يَحْذَرُونَ” (Nor should the Believers all go forth together: if a contingent from every expedition remained behind, they could devote themselves to studies in religion, and admonish the people when they return to them,- that thus they (may learn) to guard themselves (against evil)) (Holy Quran, Surah: At-Tawbah, Verse:122), a person must emigrate if the conditions are right. In this verse, the word “يَحْذَرُونَ” means “to warn”, not “to frighten”,” added the Secretary-General of the AhlulBayt (a.s.) World Assembly.

“The opportunity to serve the Islam and the AhlulBayt (a.s.), as well as to promote the Thaqalayn, should be seized. In this regard, you need to set objectives, and in addition to opportunities, take care of threats, and identify actions and strategies,” he continued.

Emphasizing the need to use cyberspace to propagate Islam, Ayatollah Ramazani added, “There are good tools for propagating Islam today. Seek to do effective activities and avoid repetitive and parallel tasks.”

“Throughout history, Azerbaijan has been a region of ulama, and Azeri speakers are very talented. Therefore, include the introducing of dignitaries and ulama of this region, such as Allameh Tabatabai, Ayatollah Ghazi Tabatabai, Ayatollah Fazel Lankarani, Ayatollah Badkoubei, Shahriyar, etc. in your seminars and conferences,” he continued, mentioning the need to recognize the necessities, harms and priorities.

“You are the inheritors of great Azeri-speaking figures, you have a great mission to continue their path. You are the inheritors of a great scientific and Ma’arefa movement, and you should be proud of that. Azeri-speaking ulama have rendered great and important services to the school of AhlulBayt (a.s.), and these services must be continued,” said the Secretary-General of the AhlulBayt (a.s.) World Assembly, addressing the ulama of the Republic of Azerbaijan.

“Do not neglect the teaching of Islamic Maʿrifa. The fruit of the school of AhlulBayt (a.s.) is the school of Awaiting (for Imam Mahdi (a.s.)). Also, self-purification, helping others to purify, and paving the way for the Reappearance (of Imam Mahdi (a.s.)) are the duties of those who await. Gaining Maʿrifa, companionship, obedience and synergy with the AhlulBayt (a.s.) is our duty towards them,” continued the Secretary-General of the AhlulBayt (a.s.) World Assembly, emphasizing the need for teaching the Islamic Maʿrifa.

“For education, organize training and skills programs, and provide certificates to participants in courses,” he said, offering a suggestion to the Azerbaijani ulama.

“Prioritize youth and adolescents in religious activities. Also, try to preserve the language, culture, and strengthen the family foundation. Because today, by redefining and distorting the concept of family, the enemies are trying to weaken the family, and promote vulgarity and debauchery. They propagandize in women affairs in such a way that they become reluctant to have children or do not pay enough attention to raising children,” said the Secretary-General of the AhlulBayt (a.s.) World Assembly about the areas of religious and cultural activities.

“The AhlulBayt (a.s.) World Assembly announces its readiness to cooperate with the ulama of Azerbaijan. We also support the activities of the ulama and the Ulama Council of Azerbaijan in the Assembly,” Ayatollah Ramazani said at the end of his speech.

At the beginning of the meeting, some of ulama of the Republic of Azerbaijan described their religious and cultural activities in various fields and called for further cooperation with the AhlulBayt (a.s.) World Assembly.